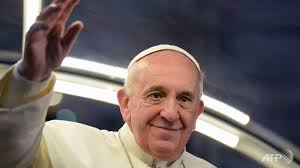 The Pope has been saying some un-Catholic sounding things lately. Relating to gay priests, he has voiced a reluctance to continue any policy that ostracizes a whole class of people. He’s promoting practical and individualized, case by case, judgements about policy issues. Similarly, he’s opening the door to women in a ‘deacon order’ that may have priest-like functions. I’m translating that to the American church where the shortage of priests is leaving rural and small membership parishes critically underserved. The day will soon come when these folk rejoice, “Hey, we got our own priest again. She’s saying mass this week.”

This has me reflecting upon the nature of a global church. It is when the Pope goes out to speak to remote locations, like Brazil, and addresses the critical issues of their churches, that we see him behaving as a true world leader. He says things in these contexts that are sure to rattle the boys in red back home. No matter what denomination we are called to, we can appreciate this. In the postmodern world, hierarchy is dead. The way to think globally is to act locally. Being members of a global church should free us for mission and service anywhere on the planet. But, that doesn’t mean that the policies established in one place should govern the church’s behavior elsewhere.

This leads me back to issues relating to sexual orientation. In my own denomination, the United Methodist, delegates from Africa have joined with American conservatives to block at General Conference any movement towards permitting clergy to be gay or to participate in same-gender unions. In some parts of Africa, a difficult history involving war-crimes, male dominance, and rape, has made the sexual orientation dialogue difficult. In parts of the sub-Sahara and rural Utah, the presence of polygamy complicates any discussion of liberalizing the definition of marriage. Further, most of the congregations that I have dealt with are totally unprepared to accept either a gay pastor or the performance of a same-sex ritual on their property.  This doesn’t mean that congregations in certain contexts shouldn’t do what is right in their context. Many churches would benefit from the flexibility to allow people of any sexual orientation to serve them. We don’t need to wait for the majority of churches to get to that place before we permit gay persons to enter the ministry. Further, as Justice Kennedy reminded us while striking down DOMA, the American people would be better served if families headed by people of all sexual orientations could be granted the benefits of marriage. Change needs to happen where it is beneficial to the people receiving it.

Now that I have myself in hot water, let me speak again the radical truth that drives me to be so bold; congregations that survive and thrive today are always highly contextualized. They know their neighbors and they do what is best for their block. They live the Gospel, even when how they live it offends other churches of their same denomination. Today’s postmodern America is exactly reversed from the late 1960s. In the LBJ to Nixon era, denominations had to use all of their authority to lead reluctant local churches into accepting people of color. Post-watergate, public institutions like denominational churches, lost their credibility. Small groups and local churches, many of them marginalized already (inner city or remotely rural) began to experiment with radical hospitality. They found that the simple words of Jesus could be lived out by loving their neighbor, even if they were gay. They formed networks that didn’t depend upon denominational offices. They learned that to be global, they had to think local.