When I went to seminary back in the 1970s, I was young, and my mentoring pastor was old. I thought he was ancient. Now, I am older than he was then, and I have been called to mentor another young person and teach her about communion. One of the first things my mentor taught me was that there is an unbroken chain of succession that connects pastors today with the twelve disciples who sat at table with Jesus on the night before his death. When we speak the communion ritual and share the bread and wine, we stand in a line of fifty odd people – each one passing what they have received on to the next generation – and in doing so, ordaining them to serve communion.

As I said, I was young then and didn’t think that this was very important. Yes, these twelve guys took a piece of bread from Jesus’ hand and heard him say, “This is my body, broken for you.” Each of them drank a common cup with Jesus. They heard the words, “this is my blood shed for you.” But, that cup (or grail) was lost long ago. And the bread that we have today is gluten free. How has the sacred presence of Jesus been passed, generation to generation, down to me?

We know that eleven of these twelve went out to spread the gospel. They formed fellowships and built worshiping congregations in every place. Thomas went to India and Peter to Rome. They were ordered, or one should say “ordained,” to do communion wherever people gathered in Jesus’ name. These clergypersons nurtured the spiritual gifts of the people they served and found in younger men and women who would do this work after they had gone. One of these was named Mark, and he not only wrote the gospel, but also took communion to Africa. He became the founder of Coptic church. And young people in that church took the bread and wine and shared it across the continent. In what is modern day Tunisia, the church grew very strong. One of the young people ordained in that church was named Augustine and he became one of the most important theologians of the church.  As Christian pastors worked over the centuries to share the gospel and bring communion to distant places, they shared the teachings of Saint Augustine to feed the minds of young people. Just as the Lord’s Supper feeds the soul.

As people shared communion in every place, they used what they had at hand. The bread in India looked different from the bread served in England. What Jesus’ first disciples knew as his body is completely different from the gluten-free inedible wafers we share today. Since the sacred part of the meal is not the bread and wine, but the invisible chain that binds us to Jesus, what we use doesn’t matter. The meal is holy because Jesus is present. After the meal is over, the items on the altar are no longer special.

Communion is also equally valid in every Christian gathering. Jesus shows up, even when the preacher is an idiot. The grace of the sacrament even persists when people disagree, and schisms splinter the Church – with a capital “C” into various denominations. The chain of ordination splits and continues for both sides of each division. So, in the eleventh century, the leaders of the Western church parted from those in the East, who went on to call their branch “orthodox” meaning “right teaching,” while those in the West clung to the word “catholic” meaning universal. Even though each side was angry and said that they ex-communion-i-cated the other side, the chain of apostolic succession remained unbroken. If we as ordained people have any authority, it’s not because we are smarter than our laity, or because we have been trained in the right schools, or because we work harder than other people. The grace of Jesus Christ has called each of us to stand in this holy chain that stretches from generation to generation. This should humble us.

In the 1700s, two brothers named John and Charles Wesley were ordained in the Church of England. They went to America and did some lack-luster mission work in Georgia. Eventually they went back to England, where each they had a spiritual awakening. They then started a movement, not a church, that used their ordained friends from the Church of England to serve communion to people. pastors that had been ordained Episcopalian. In time, John Wesley sent a few pastors of this “Methodist” persuasion to America. Now about that time, our country had a rebellion and fought a war with England. People here wanted our own pastors – not ones that belonged to the church of England. So in 1784, we ordained two of these pastors to be our bishops and started our own church. Their names were Robert Coke and Francis Asbury which is why our United Methodist bookstore is called Cokesbury. These two ordained pastors and other Bishops and the chain of succession went on. Then in 1845, there was a split, or I should say a splintering. The Methodist churches in the South, believed it was okay for pastors and bishops to own slaves. Those in the North were against it. It took 60 years for some of those divisions to be brought back together. But the chain of succession went on for both sides of the conflict. I mention this now because there is currently a division among our church’s leadership as to how to respond to the demands of LGBTQ Christians that they be given full rights and membership in the church.

A long time ago, ago a man named George Bashore was ordained in the Evangelical United Brethren church. Then in the 1980s he became bishop in for the Maine conference of the United Methodist church. While there, he ordained me. That was when I, personally joined this chain of apostolic succession. I am not perfect (yet). I do not serve communion because I am any better than anyone else. I am humbled by the grace that has included me in this chain that goes back to when Jesus broke bread and took the cup and spoke of how he would give his life on the cross for us.

Now all this was taught to me by my mentor, and I pass it on to you. But as I said before, I was skeptical about it at first.

In the mid-1990s, I had the opportunity to go to Israel and see the land of the Bible for myself. It was a 10-day bus trip, economy fare, nothing fancy. Each day our guide would take us to a location and say, “The tradition it that Jesus did such and such here. But it could have been over there, or a few miles to the South.” After about a week of this, we came to Jerusalem. The holy city was destroyed in 70 ad. Not one stone was left standing upon another in the temple area. So, there is nothing from Bible times to see. The guide took us to two different places where it is traditionally thought that Jesus died on a cross. Two different tombs where people say he was buried. This is literally over-kill. (By the way, both tombs are empty) I was beginning to get a bit grumbly. Then our guide took us to a place where archeologists have uncovered an ancient road with cobblestone steps leading up from the lower city of Jerusalem. We stood on the steps and our guide said, “We know that Jesus walked here. You are standing on the footprints of Jesus.” You see, these steps connected the home of Caiaphas, where Jesus was put on trial on Good Friday, and the porch of the Fortress Antonia where Pontius Pilate passed sentence and had Jesus taken out to be crucified. We know that Jesus was here – right here—as he prepared to make his great sacrifice for us. 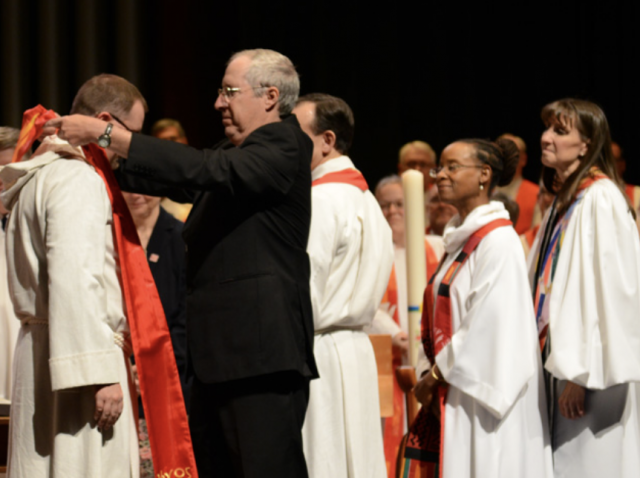