In the story of David and Goliath, the young shepherd boy gets asked why he is willing to fight the giant. David replies by explaining the type of shepherd that he is. “I’m the kind of shepherd who has skin in the game,” he says. “Late at night, when I am alone with the sheep, wild animals will come, wanting to steal one of my flock. I do not run. I stand my ground. I fight the wolf or the lion, pelting them with stones from my slingshot. Whatever danger befalls my sheep, I share it. I care for my own.”

Other sheep are not so lucky. Many flocks, then as today, have poorly trained employees punching a clock as they watch the sheep. Wild animals find it easy to scare these hired babysitters away. The lion roars. The bear raises itself up on its hind legs and snarls. The pretend shepherd runs away.

Jesus says, “I am the good shepherd. I give my life for the sheep. I do not run from their afflictions. I stand my ground.” (John 10:11-18) Why is Jesus a shepherd like David and not one like the hired hands? Because Jesus cares for us. The flock of humanity is his own.

Whenever a group of people has someone who acts as both their leader and protector, the same distinction between real shepherds and hired hands plays out. The leader who loves each member of his or her flock is like a good shepherd. They are committed to sacrifice. Protecting and serving is more important than collecting a paycheck.

This year, with the killing of George Floyd, the difference between a good police officer and a bad one has come to the forefront. On the badges of many officers, there is the motto, “To protect and serve.” That said, what Jesus is speaking about is more than the misbehavior of a few hired servants. He is talking about the attitude that leaders have towards those that they lead. Do they love to the point of sacrifice each of their charges, regardless of race, religion, or history of prior arrest?

When we occupy a leadership role in the church, we must not only love sacrificially, but we must also love unconditionally. That is the shepherd’s love that Jesus models for us.

Similarly, when we act as leaders and/or parents in a family situation. We must behave with grace, offering forgiveness for past wrongs and loving equally all in our care. 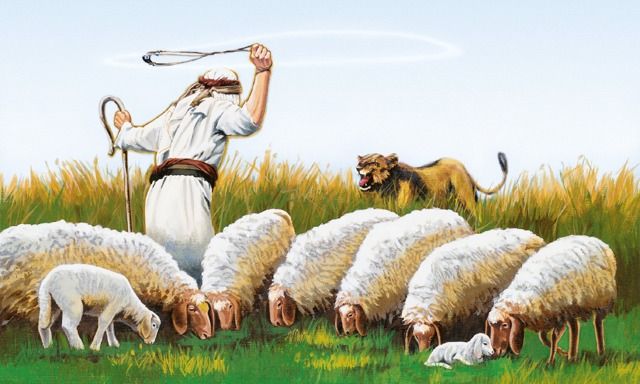