If you read a Bible commentary or google a familiar passage of scripture, one of the useless pieces of information that you’ll encounter, over and over, in the New Testaments is how this or that passage was copied or “borrowed” from the Old Testament. Go to seminary for three years and you’ll be convinced that all the greats, like the apostle Paul, plagiarized so freely that they wouldn’t last a semester in your school. The trouble is these helpful commentaries often get read instead of you doing the work of reading the Bible more closely and grasping the themes that reoccur from generation to generation.

Take the familiar passage in the Christmas story where Mary, being pregnant with Jesus, went up to visit her elderly relative Elizabeth, also pregnant, in Judea. Mary is barely through the door when she lets out this song, known in the Latin as the Magnificat. The footnotes of most Bibles will tell you that this song is borrowed from the song that Hannah sang back in I Samuel. Take a quick glance and you’ll assume that Mary had been listening to this in the car on the way down and it stuck in her head, so she sang it for Elizabeth after changing a few words to get over any copywrite restrictions.

Let’s get real. Mary and Hannah live in different eras about a thousand years apart. When was the last time you heard of a rock group getting dinged for singing the same words as a Gregorian chant? Historical books like Samuel were not frequently read in the synagogue and folk songs rarely get sung a century after their creation. When you look at the two songs side by side, they aren’t that similar.

What is worth noting is that Hannah and Mary are both women, living in what we would consider oppressive times. They are both unfairly treated. They both view their unexpected pregnancy as a sign, or perhaps even a rebuke of the men around them, from God. “God listened to me. This child is an answer to prayer,” both songs say. Mary may have heard Hannah’s song being read and nodded at certain themes that are common to all women who find themselves judged on account of their body and reproductive experience. As a man, I often forget the pervasiveness and cruelty of society’s expectations surrounding women and childbearing. Some would say that little has changed since Hannah and Mary sang.

Hannah was in a polygamous marriage. When she had difficulties becoming pregnant, her husband married a younger gal who bore him many sons. Her husband still loved her, it’s just that society says you aren’t doing your job as a woman if you don’t become a mother. At the temple, Hannah prays passionately and long, yet her lips move silently, so the priest accuses her of being drunk. When at last she becomes pregnant, she sings, “[Now,] my mouth boasts over my enemies.” This song, however, is sung after she goes to the temple and gives the priest the job of raising her three-year-old. I don’t think we should follow the Bible’s advice here. The lesson we learn from Hannah, however, is how this woman doesn’t let herself be defined by society’s expectations regarding motherhood. Her song speaks of her triumphing over her enemies. Her number one enemy is her sister-wife. The Bible permits polygamy but doesn’t speak highly of it. The Bible’s greater requirement is that we live compassionate lives. This encourages us to honor our significant others with loyalty and fidelity.

Mary’s song emphasizes humility because she realizes that this child will become the Messiah. That God chose her, gave her this motherly vocation, and a role to play in the salvation of the world, fills Mary’s heart with song. She, however, had the opposite shame and problem with society that Hannah had. She was pregnant before marriage. The people of her day had laws that enabled them to stone such women, even though it meant the loss of the child. They were also willing to shame any children born out of wedlock. Mary, and later Jesus, didn’t speak about triumphing over their enemies. They instead emphasized our individual need to be true to our own conscience. Women often make difficult decisions about their own lives and this gift of motherhood. These decisions offend the men in authority. We shouldn't elect men who are so easily offended. I respect the prayers, attention to the scriptures, and choices that people of faith make, even when it would not be my choice if I were in their shoes. If it is physically impossible for me to be in their shoes, I should be especially non-judgmental. 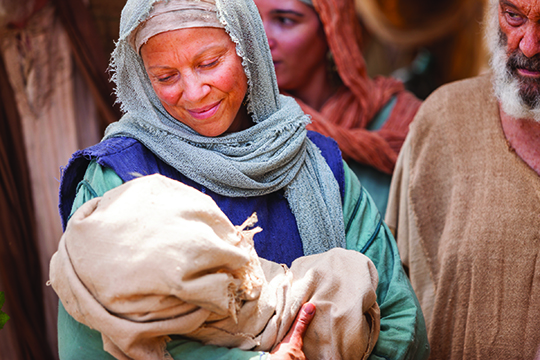