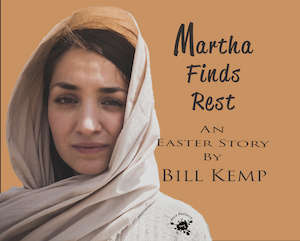 In my novel, “Martha Finds Rest,” I retell the story of the first Easter. When I get to the part where Jesus visits the upper room in John chapter 20, my novel dramatizes the events, utilizing the viewpoint of a spying twelve-year old:

Young Mark returns to the fig tree near the market and climbs. Resting on a limb he can look in to the second story space, spying through an open balcony door. He had been in a similar position the previous Thursday, observing the final meal this Jesus had with his disciples.

Mark counts heads. There are ten men, where once there were twelve. Thomas and Judas are absent. After Jesus’s arrest and crucifixion, it is surprising to find any of them here at all.

There is a meal laid out on the table, and the men take their places. Passover is over, so there isn’t lamb. Instead, the small dried fish that arrives each day from Galilee has been heaped in the center. There is also fresh bread. Even from the tree, Mark can tell it has just been made, for the loaves are rounded and puffy. With the end of the festival, yeast has quickly returned to the dough troughs of the women. The bread of life has risen.

John, now, stands alone at the end of the table. He raises a loaf of bread and pauses. Mark knows what should come next. There is a prayer where the host of a meal gives thanks for the bread and the wine. Bread is made only by the labor of our brows, the toiling of farmers in the fields, the work of women kneading the dough, the watchfulness of servants tending the fires that bake it. But wine is a gift. A blessing that the Lord-God did not have to bestow upon this planet. Grace provides new wine for the afflicted. Grace provides old wine for those whose tastes for other foods have been dimmed by the passing of time.

In place of the expected prayer, John speaks another. The men seated at the table join in.

Who abides in heaven,

Holy and worshipped is your name,

Thy will be done

With you in glory, forever.

Give us day by day

The bread that sustains our body,

And forgive us our failure to be compassionate,

As we forgive those who mistreat us.

Don’t forsake us in situations that are beyond our capabilities,

And give us the courage to respond appropriately to evil.

Instantly, Jesus is beside him.

Mark holds the branch tightly. He calms his mind. He notes how each person in the room receives the sudden appearance. Most are startled. Several have fallen back in fear. The bench that three had been sitting on tips over. In the confusion, though, the heavy man called James expresses delight, his beefy hands clapping. Simon the Zealot has a knowing smile. Peter is subdued. John embraces Jesus, the bread having fallen from his hands.

Jesus motions for them to be calm and resume their seats. His hands have two dark marks where the nails would have been. He says, “Shalom. Peace.”

He takes a dried fish from the table, breaks a piece from it, and eats it. “I am not a ghost. This is the body you are familiar with. But I have been made new.”

“Think of the farmers, sowing their seed. What they plant is not this bread. Resurrection is but one step in a much longer process. It is like baking. When the time is right, the dough is hidden for a while and then brought forth changed.”

“And death is as painful as fire?” Peter speaks again.

Then Jesus raises his hands and sings in a sweet voice:

A seed is sown, small and fragile.

It rises up, imperishable.

In this soil, we are often ashamed,

Life is lived in weakness.

We are raised in power.

The body is a natural thing.

Being human is a spiritual thing.

Then Jesus’s expression turns serious. “I don’t have long to be with you. Listen. You have completed the first phase of your process of discipleship. You have watched what I have done. You have practiced it in my presence. My peace I give to you as your most cherished possession. My spirit I give to you as your guide. As you have been forgiven, go forth and bring healing and forgiveness to others. You and the women shall be my witnesses.”

Into the silence of the room, he speaks a final word: “Shalom.”

With this, Jesus disappears.