Deprecated function: Array and string offset access syntax with curly braces is deprecated in include_once() (line 20 of /home/ezmpkoktxhha/public_html/billkemp.info/includes/file.phar.inc).
×
Exodus 20:1-17
You shall have no other gods before me.

Whenever I think about the ten commandments, I always picture Moses with two stone tablets in his hands. Traditionally, commandments are shown with numbers one through four on the first tablet, six through ten fit on page two. Newspaper people speak of putting some articles above the fold, and others below it. The above fold commandments deal with how Jewish, Christian, and Moslem people show respect to the God of Moses.

The people whose faith harkens back to Mount Sinai (Moslem, Christian, or Jew), honor our God by:

These four commands are important to those of us who are anywhere in the broad traditions of Christianity (whether orthodox, Catholic, Quaker, Mormon, etc.), or Judaism (orthodox, reformed, Hasidic, etc.), or Islamic (Shite, Sunni, Sufi, etc). This is well over half of the people who practice religion on this planet. But, and this is a big BUT, these four commandments do not apply to anyone outside of the above traditions. Sorry. It only would confuse a Hindu for them to try to keep commandment number one. A secular, but patriotic, person who worships the American flag will find it difficult to have no idols. Those who religiously follow their horoscopes will wonder why we have a command dealing with magic. Unfortunately, most Christians entirely ignore commandment number four, dealing with not working on the Sabbath. Before we go hanging these ten commandments in our courthouses, we best understand them.

God did not tell Moses to go back to Egypt and make the worshipers of Osiris and Nut to obey these new rules. It would be like asking the average American to learn the rules of cricket. If someone is of another religious tradition, we shouldn’t go shoving the first stone tablet down their throats. God always takes us where we are, and then teaches us what we need to know next. Those of us who think of ourselves as Christians need to know our ten commandments better. Before we go forcing them on anyone else, we first need to look at how we keep the Sabbath holy. Do we idolize things or people that we shouldn’t? Do we have another god in our lives, whether it be alcohol, pornography, or political polarity?

The other six commandments belong to the world. It is hard to imagine a civil society without rules against murder, stealing, and lying. The last commandment, the one about coveting, is radically un-American. I think this is Jesus’ favorite commandment. Grasping the danger of consumerism can transform your life. What would happen if we each tried to live without coveting? Who would buy all the cars and lottery tickets? Madison Avenue would go bust. So go below the fold, or on to page two, when you talk about the ten commandments with your unchurched friends. Hang 6 through 10 on the courthouse wall. But take 1 through 4 personally. 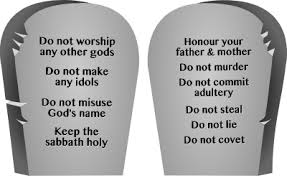