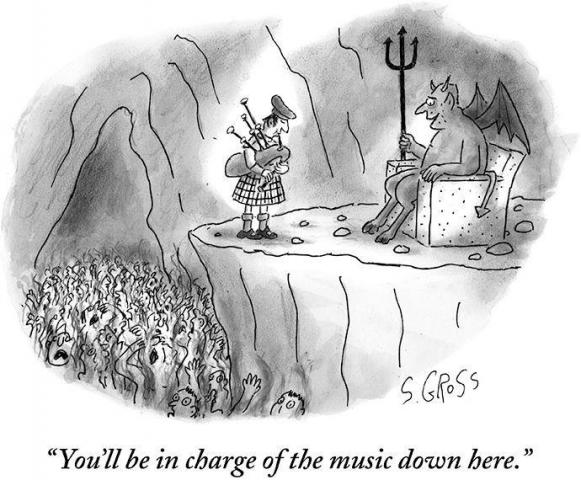 First let me say that this cartoon gets it wrong. True: bagpipes are hideous when badly played and serve such a narrow range of music that they are the butt of many jokes. Yet when I try to imagine the music that will be played in hell, my closest reference point is to ask, what kind of music was played by the Nazi party during their conquest of the German people? It is unlikely that Satan has the same musical tastes as Hitler, but I think their utilization of music will be similar.

In Nazi hell, the loud speakers carried Richard Wagner’s symphonic celebrations of the German spirit (think Apocalypse Now, note that Wagner died in 1883), Strauss-type marches (Strauss himself parted ways from the Nazis in 1935), and Beethoven, who said that,"strength is the morality of the man who stands out from the rest.” Next time you have the traditional verses contemporary music argument, bring out this list.

Our choice of music for church services, has to reflect our commitment to diversity and the capacity music has for helping us to understand other cultures. Music Nazis in the church often want to narrow selections to the tastes of the current majority or “what we all know.” In 1933, the German people all knew that their kinfolk wrote the best music. I imagine that in Hell, souls are given headphones and made to hear the music of their childhood played repeatedly.

All forms of music, with the possible exception of Techno, can be used to celebrate ethical behavior, faith, and love. Music can also be used to engender loyalty in false gods, materialism, and xenophobia. Our choices in the church must be made prayerfully and with discernment as to how those who are new to our worship will be effected by our songs.