Some people can summarize their entire life’s story in one line. One thinks of Nixon saying, “I am not a crook,” or the hypochondriac who was buried under a tombstone which said, “See? I told you I was sick.” Or the apostle Paul, who called himself "a slave of the Lord Jesus Christ."  For a bitter old woman named Naomi, the line was, “The Lord has turned his hand against me.” Imagine how this pronouncement colored her attitude. It might be a beautiful morning in Moab, but Naomi says, "I'm a refugee far from home and God is out to get me." True, she had lost her two sons and it is a hard thing for anyone to bury their children, but to say that the Lord has turned his hand against us personally is to remove all chance for finding meaning or hope in life. One definition of insanity involves believing our own internal messages, even when those messages aren’t helpful.

The book of the Bible where Naomi's story is found is named "Ruth." It isn't named Naomi, because the Bible is all about using faith to change the internal messages that keep us stuck in life. Ruth is a young woman who was widowed. She could have been bitter, but she wasn't. She could have been change resistent, but she set out to move to a new land. She did this out of loyalty to her mother-in-law Naomi. When we seek to explain Ruth’s behavior, her leaving her home in Moab and going to Bethlehem, we tend to speak about how Ruth loved Naomi. If she did, it was a choice made by faith, counter to her natural instincts and the negative internal messaging most of us utilize. When is love more than a feeling?

The only way to explain Ruth’s behavior is to suppose that both God’s prevenient grace led her to believe that Moab was not her true home. She came to realize that there was a bigger plan for her life and a greater spiritual force for good in the world than the gods she knew of in Moab. This caused her to choose to love Naomi and follow her to a new home in Israel.

That being said, we need to speak about God’s grace in a way that the Naomi’s among us can hear it. The Lord doesn’t turn his hand against us to shame us. The adversities we face are not punishments. From time to time, though, the Lord does allow circumstances to push us. We sense God calling us… or should I say, forcing us, to turn and go a new direction? To leave Moab and go up to Bethlehem, whether we be young like Ruth or old like Naomi. 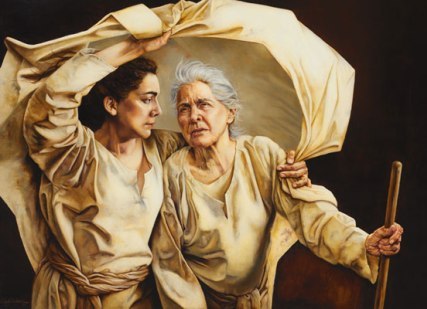