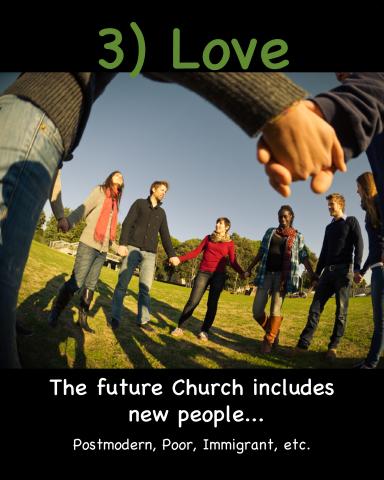 You know how you pass those signs saying “Leaving City Limits of…”? Today I realized that I had left the holiness movement. My denomination (United Methodist) has a rich tradition of seeking personal holiness above all else. The Holiness Movement, which began in Wesley’s time among anabaptist groups, rose in prominence in the American religious scene throughout the 1800s, then lost favor to the prosperity gospel of the 1960s. Until the new millennium, I considered myself a holiness preacher. More than my colleagues, I emphasized the need for Christians to lead lives that grew more holy each passing day. Today, I saw the last hint of that attitude fade in my rear view mirror. In fact, I’m starting a new book on John the Baptist (see Weekly Word), and I don’t plan to use the word holiness once.

+ That the way Christians prove themselves to be Christian is by living a holier lifestyle than those around them. Pure living is for the Christian what circumcision and kosher diet is for the Jews. We, “don’t smoke, drink, or chew… or hang around with those that do.”

+ The goal of every holiness Christian is to become perfectly pure or sanctified. We hope to obtain this in our lives, but realize, “that it’s hard to fly like an eagle when you are surrounded by turkeys.”

I know now that these statements are offensive to the postmodern people. But do they have any biblical basis?  In 2001, I went on a sabbatical. Freed from the weekly obligation to speak from the pulpit, I began to study what Jesus preached.

+ Jesus doesn’t advocate a holy lifestyle as a mark of distinction between saved and unsaved. Instead he speaks of a radical love. He calls his people to feed the poor, visit the sick and imprisoned, and befriend the outcast. Further, his ministry represented a total commitment to obtaining basic civil rights for all people.

+  In those few places where Jesus speaks about the personal sins, such as, adultery, divorce, or the abuse of children, he does it in the context of his outrage at religious leaders of his day. He accused them of abandoning the wieghty matters of the law: justice, love, mercy.  The Pharisees and Saducees were only interested in biblical ethics if they could use it to humiliate the women, dependents, and the foreigners that they were oppressing.

During my sabbatical in 2001, I also began to examine the linkage between perfectionist theology and clergy abuse, shame-based relationships, codependency, mental illness, etc. I purchased the web domain www.notperfectyet.com as a container for my discoveries. I told people it was a methodist joke. Perfectionism was, however, a serious problem in my life.

Methodists tend to temper the holiness line by adding the wesleyan phrase “in love” to the question “do you hope to be made perfect in this life?” The problem is that the love Jesus demonstrated forsook any appearance of holiness. He, and the apostle Paul, advocated unconditional acceptance of God’s grace in our personal life. Putting aside our own attempts at holiness provides the energy we need to be effective  witnesses. Instead of spending endless hours defining sin, like the Pharsees did, we go out to minister to those who, like us, felt cut off from God.

To fix the church today, we must put all of our energies into sharing the grace of God with new people. These are the very people that because of their sexual orientation, immigration status, or lack of holiness, we may have rejected before.