Deprecated function: Array and string offset access syntax with curly braces is deprecated in include_once() (line 20 of /home/ezmpkoktxhha/public_html/billkemp.info/includes/file.phar.inc).
×
Luke 13:1-9
No, I tell you; but unless you repent, you will all perish - Jesus

The events of this past week in Ukraine reminded me of what Thomas Friedman wrote about how people adjusted to the random horror of the civil war in Lebanon. The conflict reached the point where mortar rounds fell indiscriminately on both the rich and the poor neighborhoods of Beirut, on both the Christians and the Muslims, on both the loyalists and the rebel sympathizers. It didn’t matter which side you were on, you died. Jesus was in a similar Middle-eastern city when people asked him to comment the unfortunate victims of Pontus Pilate’s killing spree. Like Thomas Friedman, Jesus was blunt in accepting the total unavoidability of life’s traumas. Whether you are a good person, who never misses church, or a bad person, who sneers at God, a school shooter may terrorize your kids, or bully like Puttin invade your country.

The human heart is not built for such randomness. We crave for order in all of life. Friedman describes how the people of Beirut developed complicated folk cures for the daily violence. They said, “Don’t shop between 11 am and 1 pm,” or “Walk on the right hand side of the street when you go   west.” In Kalamazoo, the news interviewed a man who was planning to walk home from a party, but when he heard that someone was shooting people, decided to call for an Uber cab.

Jesus said, unless you repent, you will fare just like one of these victims (Luke 13:3). What do I need to repent of? I used to think he meant that I should get saved, but that doesn’t fit the context. Jesus never teaches that his religion will bring certainty to those of us who struggle with life’s randomness. This is an area where evangelical preaching often strays far from Jesus’ whole message. In a nutshell, Jesus calls us to live as people of compassion in every moment. We are not to expect our religion to coat us with teflon so that bullets bounce off. We are instead, to live as if we were a man going up from Jericho to Jerusalem. We do not know if on this journey we will fall victim to random violence, or if we will have an opportunity to bring healing to a broken person that we un-expectantly stumble upon.  The only thing we know for sure, is that the kingdom of God is among us. This is grace.

We all share a theological error with the unfortunate people who Pilate killed as they were going into the temple to make their offering. We all seek to join something, sacrifice something, or believe something, that will protect us like an amulet from evil. Will my family be safer if I vote for Trump or Bernie Sanders? Will our jobs be more secure if we unionize? Will I be healthier if I decaffeinate my coffee or put saccharine in my tea? Fanaticism is born in such religious hopes. The Jesus that no one listens to, is the one who blesses us with the paradoxes of the beatitudes, who insists that those who morn will be comforted, and who calls us to love even our enemies.

Jesus follows up the question about the random violence in Jerusalem, Ukraine, and the United States, with a parable about a fig tree. This must have been frustrating to his hearers who wanted him to tell them how being saved, baptized as an adult, and voting republican, would prevent them from falling victim to such tragedies. We each are like fig trees that God has planted in fertile ground. We have the constant sunshine of our relationships with others, though often human sin interrupts things, just as storms affect the fig tree. Never the less, most of us get enough love from others to grow into mature adults. What does God expect now? The fruits of compassionate living. I know no other preparation for the coming time of judgement, than to do our best with the spiritual gifts and relationships that God has gifted us with. 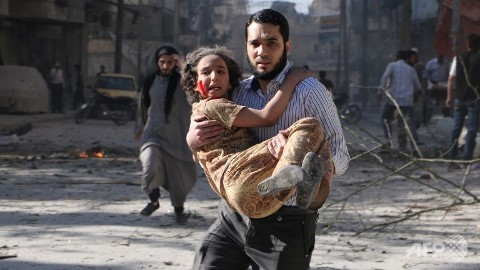