Deprecated function: Array and string offset access syntax with curly braces is deprecated in include_once() (line 20 of /home/ezmpkoktxhha/public_html/billkemp.info/includes/file.phar.inc).
×
Mark 11:1-11
"Blessed is the coming kingdom of our ancestor David!" - the crowd setting Jesus up to get arrested.

The story of Palm Sunday provides two of the five reasons for Jesus going to the cross. I'm reminded of Shakespeare’s play Hamlet. In the third act, the windbag Polonius gets accidentally killed by Hamlet. There are five reasons for Polonius to die: 1) He was a fool and a busy body (nobody likes him), 2) Polonius was an inept spy, 3) Polonius' death proves that Hamlet to be capable of action and avenging his father's murder, 4) Polonius' death advances the plot and sets in motion other events and deaths, and 5) Shakespeare wanted Polonius to die.

The five reasons for Jesus to die are:

1) Jesus is Messiah - There is an expectation for God to provide a king, like David, who will lead his people into independence, justice, and godliness. While Jesus the was true "king of the Jews," the political reality was that anyone who claimed this throne would die. On Palm Sunday, Jesus claimed to be the king of our hearts, and his rule in our lives will lead us into independence, a concern for justice, and a desire to grow in God.

2) Jesus entered the city humbly, riding a donkey. His death showed the nature of human sin, that we reject the way God chooses to enter our hearts. We expect leaders to be strong, but he shows himself to be weak. Jesus doesn't force himself on us. He was mute before Pontius Pilate. He knocks.

4) Jesus needed to die to conquer death. The victory of Easter was won from inside the grave.

5) Jesus died because the Holy One willed it. By this incarnation and this specific death, a bridge of empathy was built between God and humanity.

Palm Sunday begins the Passion story. Like all well-told stories, the plotline is complicated. I’ve written and directed several Easter Dramas/Passion Plays. There are a lot of moving parts. Some years Pontius Pilate steals the show and people go home feeling that if this man had been different – had better motives or been more principled – then the play would have ended differently. But, that simplicity doesn’t last long. Every part is important in this story. Everyone shares some guilt. Jesus’ death was overdetermined. But the salvation that emerges from the Easter story also works on many levels. Every one of us comes away seeing what we need to see. 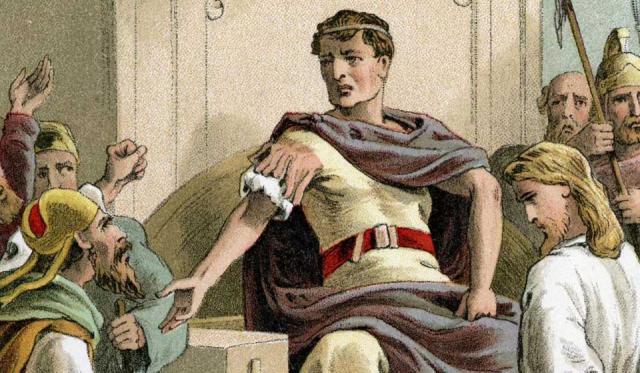