Deprecated function: Array and string offset access syntax with curly braces is deprecated in include_once() (line 20 of /home/ezmpkoktxhha/public_html/billkemp.info/includes/file.phar.inc).
×
Luke 19:28-40
As he was now approaching the path down from the Mount of Olives, the whole multitude of the disciples began to praise God joyfully with a loud voice

The story of Palm Sunday provides two of the five reasons for Jesus going to the cross. I'm reminded of Shakespeare’s play Hamlet. In the third act, the windbag Polonius gets accidently killed by Hamlet. There are five reasons for Polonius to die: 1) He was a fool and a busy body (nobody likes him), 2) Polonius was an inept spy, 3) Polonius' death proves that Hamlet to be capable of action and avenging his father's murder, 4) Polonius' death advances the plot and sets in motion other events and deaths, and 5) Shakespeare wanted Polonius to die.

The five reasons for Jesus to die are:

1) Jesus is Messiah - There is an expectation for God to provide a king, like David, who will lead his people into independence, justice, and godliness. While Jesus the was true "king of the Jews," the political reality was that anyone who claimed this throne would die. On Palm Sunday, Jesus really claimed to be the king of our hearts and his rule in our lives will lead us into independence, a concern for justice, and desire to grow in God.

2) Jesus entered the city humble, riding a donkey. His death showed the nature of human sin, that we reject the way God chooses to enter our hearts. We expect leaders to be strong, but he shows himself to be weak. Jesus doesn't force himself on us. He was mute before Pontius Pilate. He knocks.

4) Jesus needed to die in order to conquer death. The victory of Easter was won from inside the grave.

5) Jesus died because the Holy One willed it. By this incarnation and this specific death, a bridge of empathy was built between God and humanity.

Palm and Passion Sunday are not in opposition and there is no reason to make people feel guilty by calling attention to the way the crowds who proclaim him king on Sunday will be calling for his crucifixion by Friday. Instead there is a rich and multi-level plot going on and we can celebrate the two events at the same time. 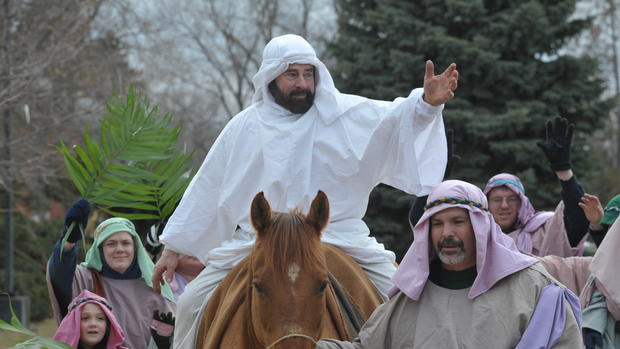