×
Deuteronomy 34:1-12
The Lord said to Moses, "I have let you see the Promise Land with your eyes, but you shall not cross over there."

The story of Moses and the great wilderness transition comes to an end on Mount Pisgah (Deuteronomy 34:1-12). Like all great stories, it is bitter-sweet. The future lays before Moses. He can look into the Promised Land, but not enter. His role has been to guide the people out of slavery and through a transitional period. I’ve always felt that those who look for some sin to be the cause of Moses not crossing the Jordan, miss the point. Most of the world’s greatest leaders were given boundaries. Winston Churchill led Britain through World War II, and then was promptly voted out of office. Alan Turing conceived the logic behind the modern computer, and then was discredited, ostracized, and driven to suicide, least he enter the digital age. An ungrateful military complex revoked Oppenheimer’s security clearance after he had midwifed us into the atomic age.

The most memorable example, however, is Dr. Martin Luther King. He referred to the end of Moses’ leadership on Mount Pisgah, when he said:

…it really doesn't matter to with me now, because I've been to the mountaintop. And I don't mind. Like anybody, I would like to live a long life–longevity has its place. But I'm not concerned about that now. I just want to do God's will. And He's allowed me to go up to the mountain. And I've looked over, and I've seen the Promised Land. I may not get there with you. But I want you to know tonight, that we, as a people, will get to the Promised Land. And so I'm happy tonight; I'm not worried about anything; I'm not fearing any man. Mine eyes have seen the glory of the coming of the Lord.  (Martin Luther King’s last speech at Memphis, Tenn. April 3, 1968)

Moses doesn’t enter the promised land. That doesn’t make him a failure or mean that he was being punished. The lesson is; many of us will have tasks where we participate in or lead in a difficult journey, but are locked out of the destination. We do our best work, when we accept this Moses-like role. In fact, great evil has been done in this world by people who insisted on the being both transitional guides and promised land politicians. It’s OK to die in the wilderness. Dr King says, “I’m not worried about anything.” That requires faith. 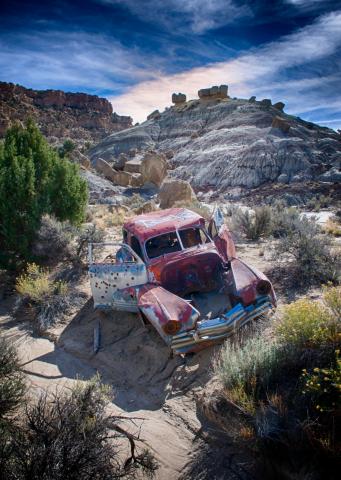