Intro: You know I've never been at a church that forgot Easter. Easter is hard to forget. Why? Because it falls on a Sunday. Our government has moved every holiday, but one, onto Monday to give us three-day weekends. Some of the most important holidays of the Bible don't happen on a weekend. Take the Lord's Last Supper, always a Thursday. This coming week we have an important holiday; Thursday is Ascension Day. Who here has ever celebrated Ascension Day? How would you do it? (Balloons)

Ascension is also the day we celebrate Jesus ascending into heaven and sitting down at the right hand of the creator. That image of Jesus sitting down is important. It says that he has finished his work, now he governs from above, and we do our work in his kingdom.

I know that in England they celebrate “Coronation day” on June 2nd– that is the day that Queen Elizabeth ascended to the throne (over 60 years ago), all those years ago. Well, how much more, then, should we Christians celebrate the day, some two thousand years ago when Jesus ascended into heaven?

You look at the four gospels: Two of them, Matthew and Luke, tell us the Christmas story of how Jesus got here. Those two stories tend to get merged. But they are very different stories. You get down to Palm Sunday and Holy Week and Good Friday, all four gospels pretty much tell the same story. Easter has a bit of variation between the four gospels, but it can be explained by the fact that Jesus appeared to different people at different times.

Think of it this way. Most of us have had a family member pass away. Now the way you remember and tell that day is very different than what appears in the doctor's notes. You may even find that your memory is miles away from that of your brother or sister, they will remember things differently than you do. In fact, if you want to start an argument, ask them what happened that day.

When a famous person passes away, their last words may be remembered differently by different people in the room. When Jacob, the Old Testament patriarch who is also known as Israel, was ready to die, he invited each of his twelve sons to come in and leaned over him -- then he said a different word to each of them.

I want you to think of Ascension Day, this way; Jesus has a parting message for each of us -- What if you lived in the first century and followed Jesus, and now he is ready to go back to heaven, what one phrase or even single word do you think he would say to you?

The Galilean people, who knew Jesus since he was a child, they needed one type a goodbye that focused on relationships. The people who would start the world’s first Christian church in Jerusalem, just ten days after Jesus’ ascension, they needed something geared towards an action goal. A task. A plan. And the people who loved Jesus in a more private and spiritual way, they too needed their own ascension story.

This might make more sense if I show you a bit from each Gospel:

Let's go to Matthew 28 -- This gospel is addressed to the people of Galilee, the fishermen who came to Jesus from near where he grew up. This group, you remember, needed to be focused on relationships. It about sharing Jesus' love one-on-one.

Did you hear that? Jesus is going back to heaven, but he tells his friends, "Don't worry. I'm going to be with you always." The relationship continues.

But Jesus knows his friends. He knows most of these guys have all gone to the same high school. That they tended to clown around together instead of listening to what he was trying to teach them. Remember one of the first things he says to Peter, Andrew, and James is, "You are fishers of fish, I'll make you fishers of men." The way he makes them into fishers of men is by making them into disciples. How do you make a disciple? You relate with them so that they learn from you. But this involves going to people who don't know Jesus and nurturing them inch by inch until they begin to follow what you are showing them.

Jesus knows that his guys have this clique. They tend to hang with each other and not start new relationships. So, when it's time to leave, Jesus takes them up on a hill. He gets everyone to look out to the horizon. He says, “you know what’s beyond that thin blue line of the horizon? People. Nation after nation. All colors of people. All kinds of people. You go and make disciples in those places.”

You know what? I think this the ascension story that you, in Oakmont United Methodist church most needs to hear. If Jesus was here. He would take you to the top of Cockscomb hill and he would say, “You need to be in mission to the world, your vision is too small. You have become a clique. You know how to fish. You know how to make caramels. You have built a strong relationship with each other by doing things together. Now go out into the community and as far as you can see. Make disciples of others.”

Now the gospel of Luke was written in a very different situation. Luke wasn't a disciple. He met up with the Apostle Paul some ten years after the ascension. And he travels with Paul from city to city. Paul has a certain way of doing things. Paul goes to a new region and he heads to the most important city of the region first and he goes to a public place and he begins to witness about Jesus. Now Luke loves to write and so as he is following Paul, he is gathering all these little scraps of paper and remembrances about Jesus. Pretty soon he says, "hey I've got enough for a book. No. I've got enough for two books." Luke & Acts. The boundary between the two is the story of Jesus' ascension.

Now the keyword for Matthew was disciples. The keyword for Acts/Luke is witness. But there is also a shift in location. The mountain of Matthew was near to where the disciples grew up. Here we have Jesus ascending outside of Jerusalem and the city is emphasized. In the book of Acts, Luke tells about what happened first in Jerusalem. How the church began in the city of Jerusalem. Then he tells about how Paul took the gospel from city to city all across the Mediterranean world and started churches in every city. So, the last word that Jesus gives is a strategy for Church growth.

{My mother's accident and the lack of witnesses}

How do you make your church grow? Two things – first utilize the communication tools you have at your disposal. Social Media. Don’t worry about if people will like you. Peter expected everyone to hate the church because they had hated and crucified Jesus just a few weeks before this. But Jesus says, you will receive power to be my witnesses. The Holy Spirit will teach you how to use Facebook. Do you know that if you post on your Facebook page, "This is what I got out of the message today at Oakmont UMC..." and they won't block you. Who here is on Instagram? Well, get that iPhone out and take a selfie in church.

Now, I am in trouble.

Before I leave Luke/Acts let me tell you the other thing. What makes a good witness isn't the words that they use, it's the joy that they have when they share the good news. If Jesus gives you peace, or healing, or joy, share it.

III. Now the gospel of John is really different. But we don't have time to look at it. But I've got you covered. John is going to preach that message next week. John says, I want to do John.

But, I told you there were three and a half...

IV. Mark is about Healing.

The scrolls were written column by column -- the end fell off. Scribes filled in using the other gospels. What does that say to us? The perfect is often the enemy of the good. Don’t try to get it right. Instead piece things together the best you can.

But something else unique comes through those added words that are today in the footnote part of Mark. Each of these endings, talk about how the people of Jesus go out and bring healing to the world. Church is to be a place of healing.

V. What Jesus says to us.

I don’t know where you are. What would Jesus’ last words be to you, if you had walked with him and then he was about to today, leave you and go back to heaven? What would he say to you? Some of us live like Galilean hicks. We have our blinders on. We don’t know who lives over the next hill. We want to keep everything local. Not to care about the world. “The world is our parish,” is what John Wesley said. And another… has said, “that the church is to mission as fire is to burning.” Some of you are like Luke, afraid to be a witness. And last, some of us are like those scrolls of Marks gospel, pieces falling off. You know how you know that you’re old. When you take off your glasses at night and your false teeth and your wig and you have more of you on the dresser than in the bed.

God has a message for us, too.

"I will be your healer and strength. Jesus says, 'I will never leave you.'" 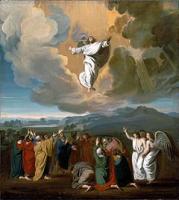