Deprecated function: Array and string offset access syntax with curly braces is deprecated in include_once() (line 20 of /home/ezmpkoktxhha/public_html/billkemp.info/includes/file.phar.inc).
×
Luke 21:5-19
James 4:13-14
Jesus says, “By your endurance, you will gain your soul."

Predicting the future is always difficult. Three years ago, everyone was predicting that Hillary Clinton would be our next president. A year from now people will be placing bets again. What we fail to realize is that everyday life is pretty chaotic. Lately it has been getting even more chaotic. When I was growing up the most popular insurance company had as its corporate logo the Rock of Gibraltar. They wanted to assure you that no matter what happened, if you had their insurance you would have the security and longevity of that famous mountain. Pretty good logo. Well today the most popular insurance company has a little green lizard for its logo. Go figure.

The Rock of Gibraltar for people in Jesus’s day was the temple in Jerusalem. Solomon had built the first temple and it lasted over 400 years. Now the Herodian kings were building a second temple. It was much grander than the first. Big stones the size of VWs were being hauled into build the wall that supported its courtyard. Jesus makes a prediction. He says Herod’s temple won’t last 40 years.

In this unstable and unpredictable world, where do we find our security? Jesus says that the chaos and uncertainty of these times will provide us with an opportunity to witness to our faith. We should seek to stand with God and our Christian values. Jesus makes this promise, “By your endurance you will gain your souls.” (Luke 21:21)

I think Jesus also calls us to put less stock in those who claim to be able to predict the future or provide easy ways to survive what is coming. Change is always difficult. It requires us to think. To make a decision about which side of each issue we should be on. Where is God on climate change? Where are America’s foundational values regarding racism, immigration, and the freedom to worship as one chooses? What do your personal ethics tell you about tendency of some business and political leaders to abandon legal guidelines regarding fairness, transparency, privacy, and public safety, in order to act in their own interests.

Scott Peck tells the story of a Jewish Rabbi in Czarist Russia who ran into trouble one day with the local commandant. The commandant was always looking for an opportunity to abuse the Jews in his district and when he saw the rabbi headed across the square at the hour of synagogue worship, he grabbed him and asked where he was going.

“I don’t know,” the Rabbi answered.

“Insolent fool. We both know what day and time it is,” the commandant screamed. “Every week you go to your synagogue at this time. How can you say that you don’t know where you are going?” With that the commandant marched the rabbi off to jail.

As he was being thrown into his jail cell, the rabbi said, “You never know, do you?”

We should have the same humility (see James 4:13-14). The disciples were convinced that the temple would last forever as a testament to the glory of God and the holiness of Jerusalem’s priesthood (Luke 21:5). You never know, do you? What about the church you worship in now? What about the social institutions that you think will never change? In the midst of this world where everything around us must change, our hope in God is the one thing that is secure. 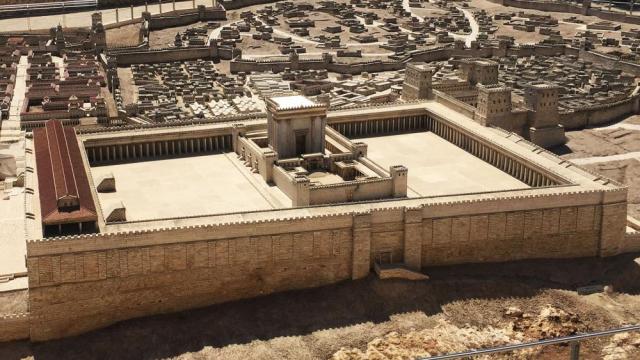