Deprecated function: Array and string offset access syntax with curly braces is deprecated in include_once() (line 20 of /home/ezmpkoktxhha/public_html/billkemp.info/includes/file.phar.inc).
×
Luke 16:19-31
And at his gate lay a poor man named Lazarus, covered with sores... - Luke 16

For fun do this: take an empty chair and put it out in front of the congregation. Say, “Here sits the invisible man. Jesus tells us that his name is Lazarus, but none of his neighbors know that. He sits here hungry, but no one notices his situation. Lazarus is homeless, living in the street near the rich man. Since he lacks an address, the census doesn’t count him, he can’t vote, and his congressman doesn’t see him as a constituent, and his president considers him a loser. He is covered with sores, but only the dogs, with their superior senses, notice him. They come to lick his wounds. Do you see him? He’s sitting right here. See, I told you he was invisible.”

Who are today’s invisible people? I want you to ask this question on three levels. First, think about your own family and closest circle of friends. Then think of your church or some other non-profit that you are a member of. Then think of our country, as one nation, under God, with justice and liberty for all – even the invisible people, or so we say. In a last week’s blog (https://billkemp.info/content/deciding-who-counts), I talked about those who count and those who don’t. Jesus often tells stories about those who have been marginalized. His general message is, you can’t be a part of the kingdom of heaven and leave anyone out. Remember the story of the prodigal son, who the father still sees in his mind’s eye even though the boy has run off to a far of country and is essentially invisible to everyone else? The older brother is disgusted with the old man. “Why do you, father, insist on loving someone the whole village has decided to consider invisible?” Then, the loving heart of God is revealed to us in that line, “your brother was lost (disappeared!) and now is found, was dead and buried, and now is alive.”

Three circles: Your family, Your church, Your nation. One problem. Let me give that problem another name, entitlement. This is a really important word. I think that if Jesus was preaching on our streets today, he would use the word entitlement. The rich man walks past Lazarus every day and feels no need to see him sitting in that chair, because his position in society allows him to feel entitled to his fine wine and comfort food, his medical plan and retirement package, his right to vote and citizenship. He was born into these things. Oh, I know he says he worked for them. But what happens in Jesus’ story? The rich man gets to heaven and finds that the tables have been reversed. Abraham says, in effect, life is like that flip of the coin at the beginning of a football game. You win the toss and you get to receive all the good things in this life. Then the second half comes (are you listening?) and Lazarus gets to be seen. Where is he seen? In father Abraham’s lap. Just like the prodigal son, Lazarus was invisible for half of the game, but now he’s found. He was dead to his family, his church, his nation, but now he lives forever. This is the word of God. Thanks be to God.

Social scientists have been studying the structure of family systems since the 1960s. Any social group, bound together by mutual dependence, form a certain order or family system. They develop their own unwritten rules which determine who counts and who doesn’t. Who gets to speak whenever a decision has to be made. Who gets the first piece of pie and who goes to bed hungry. Who has to play the role of the village idiot and who gets to say “I told you so.” Your family, your church, our nation; these are family systems. Every family system has its blind spots. An outsider will come in and see the elephant in the room, or I should say the man sitting in that chair. Every family system has its hierarchy that allows some people to feel entitled. If you have three children or more, you will have in your family an eldest child (who feels responsible for everything), a middle child (who is constantly trying to make peace), and a youngest child (who is perfect). I was the baby of my family, by the way.

But what does Jesus say? He says that the kingdom of God is not this way. In the kingdom of God, everyone is visible, everyone counts, and no one is special or entitled. Now you may not be able to change your family, your church, or your nation. Once you catch the vision that Jesus is trying to share, you do three things:

1st– You own your own entitlement. You say, where I was born, my innate talents, and my physical appearance, gave me certain things. These are gifts of God’s grace. I didn’t earn them. They may not all seem like good gifts. In each of your three circles, you will have a different level of entitlement. Now that you see it as a gift, you exercise that with a bit more humility and responsibility for those who others want to make disappear.

2nd– You work to help those who are invisible be seen, in your family, your church, and in the community at large. You are not called to solve every problem. But you can find one person in your family or church, or one cause in your community, where to work together with others to bring the needs of the marginalized person(s) to light.

3rd– But, not last. You go into your own prayer closet and hear God saying I see you. Stop letting the invisibility that others treat you with make you feel like a victim. God sees you. Jesus tells dozens of stories in which people in your circumstance are brought to the front and given honor. 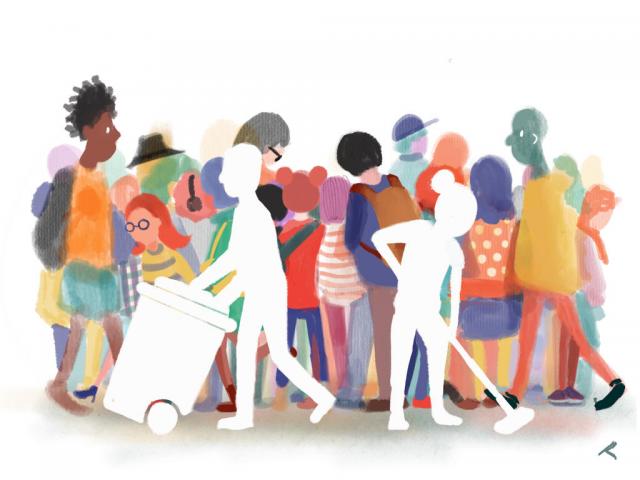