For fun do this: take an empty chair and put it out in front of the congregation. Say, “Here sits the invisible man. Jesus tells us that his name is Lazarus, but none of his neighbors know that. He sits here hungry, but no one notices his situation. Lazarus is homeless, living in the street near the rich man. Since he lacks an address, the census doesn’t count him, he can’t vote, and his congressman doesn’t see him as a constituent. He is covered with sores, but only the dogs, with their superior senses, come to lick his wounds. Do you see him? He’s sitting right here. See, I told you he was invisible.”

This week is an interesting week for Luke 16:19-31. I think it will be hard to say anything valid about Jesus’ story without stepping on people’s toes. Congress is trying to strip the Federal Budget of funding for the affordable care act. If they were dogs, they could see the underinsured people of our country. They lack the sense of the dogs who befriended Lazarus.

Worse yet, a North Carolina county voted this week to ban Ralph Ellison's Invisible Man from school libraries. The 1952 novel, which won the National Book Award, deals with the invisibility of minorities in America. I, personally, didn’t read it until the late 1970s’ when I was at seminary. It helped form my social conscience and my preaching style, which may be why the Randolph County Board of Education took it off the shelf. It’s better to have no conscience at all than a bad one. This seems to be point of the conversation Abraham has with the rich man in Jesus’ story. It seems that ignorance is no excuse, even if you are on the county board of education and hope to be white and rich in the world to come.

Maybe it would be safer to preach from Amos. Surely you can hear the Lord say, “Alas for those at ease in Zion...” and not make any dangerous connections with today’s world (Amos 6:1). Does Paul’s letter to Timothy still have any relevance (I Timothy 6:6-19)? Is the love of money still the root of all evil? Money, social class, and majority status, are three sides of the same coin. They work in unison to help one group of people look past the needs and humanity of another group of people. As soon as we deal with relevant specifics relating to wealth, race, or social status, we find ourselves with Jesus; telling stories about invisible people that no one wants to see. 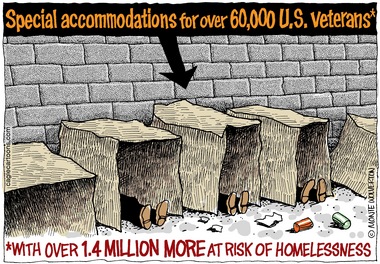