Jiminy Cricket acts as a conscience for Pinocchio — does the Holy Spirit do the same for us? Pinocchio was written over a hundred years ago as a morality tale. Children were to be read Pinocchio so that they would know not to rebel, disobey, or lie. Disney toned down the rascally nature of the puppet and added a happy ending. The original version of the story doesn’t end well for the puppet. He gets hung until he’s dead wood. Disney invented Jiminy Cricket to provide the hope of redemption. Pinocchio can be saved, if only he chooses to listen to the inner voice of conscience. All of us need someone to guide us. Don’t swat away that cricket.

Jeremiah is known as the weeping prophet. Most chapters end in sadness, because God’s people are like Pinocchio, liars, rebellious, and disobedient. In chapter 31, Jeremiah weeps because they are about to pay the price for their sin, be destroyed as a nation, and go into exile. Then the prophet hears the cricket’s voice and discovers the hope of redemption. God is sending to his people an inner guide. In the distant future, God will forgive his people. They will be restored. They will return to Palestine and once again live as a free people. This will be the Old Testament’s second Exodus. The second time in which God will reclaim his people after a period of imprisonment. On this trip back, however, God himself will be their Moses. They won’t have to stop half-way through the wilderness to pick up the Ten Commandments, for God will set his law within each person. Jeremiah sees the Disney version, complete with Jiminy Cricket and a happy ending.

What kind of an inner voice has God set within your heart? When have you looked for your conscience to guide you and found it out of order? There have been times when the conscience of a whole people has been wrong, such as when slavery was practiced in America. I think it’s possible for us fall prey to evil inner voices. The greedy person listens for money to guide their every decision. Nations often allow a spirit of nationalism, isolationism, and cruelty to guide their course in the world. Families are often ripped apart by the inner voice of addiction. The list goes on. 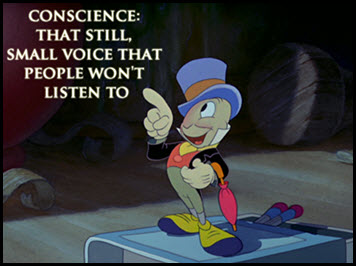