John tells us the Easter story through three very different sets of eyes. Peter, Mary, and John represent three people who come to accept that Jesus is alive via three very different routes. As we look at each one try to find the one aligns that best tells your own faith journey.

Peter’ day begins with Mary Magdalene pounding on his door. “Wake up. I know you’re in there. Wake up!” She tells him that someone has stolen Jesus’ body. He is off and running. He is now responsible for what is left of the Jesus Movement. Since Jesus died, the women and the disciples have been depending upon Peter to get them out of Jerusalem and safely to Galilee. He is their leader. Don’t think of Peter as impulsive. Having been through what he has been through this week, he is a changed man. A defeated man. People who have had their hopes dashed tend to become real pragmatic. He has probably spent the whole sabbath packing and planning how to go north by way of all the back alleys. Then Mary is there saying that Jesus’ tomb has been robbed. He runs to see what she is talking about. He knows that half of the crew won’t leave town with him until he investigates and sets this latest problem to rest. So he comes to the tomb and sees nothing. It takes the rest of the day for him to accept the Easter story. Many of us are like Peter, accommodating the good news bit by bit. We stick to the practical and depend upon others to explain things to us. We may not describe ourselves as religious. But Peter gets to be a part of the Easter story.

Then there is Mary. She believes even when there is no reason to believe. At great risk to herself she comes to the tomb early. When she finally sees Jesus, she clings to him like she’ll never let him go. John says about her, though, that she isn’t willing to stop and think about what she is experiencing. We are called to reflect upon our religion. To think it through. Don’t worry. Faith will always be strong enough to stand up to honest criticism.

John presents himself as the ideal believer. He does this in other places in his Gospel, too. It may not be entirely an ego trip. John is saying that after he is gone, many people, including many of us will experience Easter in the same way that he did. John came to the tomb with Peter and found it empty. Then John looked and saw how the grave clothes had been neatly folded. This was not the work of grave robbers. Then he sees the napkin neatly folded. Folded just the way Jesus did each time he ended a meal. John saw all the signs and concluded that Jesus is alive.

We receive on Easter morning the blessing that Jesus spoke to Thomas, “Blessed are those who have not seen, but believe.” Reflect upon all that you see. Come to faith, like Peter, or Mary, or John. Just come to faith. see also http://billkemp.info/content/hearing-and-believing 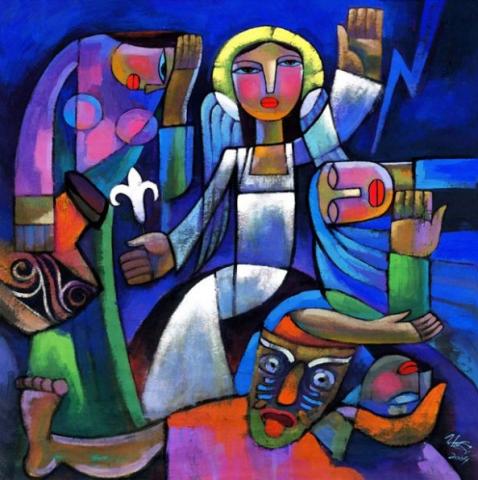