Deprecated function: Array and string offset access syntax with curly braces is deprecated in include_once() (line 20 of /home/ezmpkoktxhha/public_html/billkemp.info/includes/file.phar.inc).
×
Acts 2:42-47
"Day by day, as they spent much time together in the temple..." - Acts 2:46

The second chapter of Acts describes the golden era of Christianity and the Church. People were gathering together every day. They had this meeting spot staked out in Jerusalem’s temple courtyard (it was the off season that follows Pentecost and the beginning of summer, so the establishment didn’t kick them out). Picture a few thousand people singing; the stone walls making them sound like God’s own choir. They fellowship. Eating fresh baked bread together. Poor and rich at the same table. Sharing a common cup. Taking care of the foreigner who had traveled there for the holy days and then got stuck by the surprise of Jesus’ resurrection and the invitation to stay and become a part of something new. Some from neighboring villages joined with them in founding the world’s first Christian church. This meant losing whatever job they used to have. They swelled the city’s ranks of the unemployed. But the apostles taught this crowd everything they had learned from Jesus, and no one complained if the sermon went past noon. Including the bit about sharing. So, the local folk took care of these strangers and the unemployed persons camping out on their front lawns.

And then there was the praying. You know who was the head of the prayer circle? Yes, Jesus’ mom. Everyone said that Mary had some kind of direct line to heaven. But the thing that was different about the praying at that first church in Jerusalem was that people actually believed that prayer worked. Four things marked that golden age, people finding scripture (the apostle’s teachings) relevant, people witnessing with joy, people being inspired by worship, and people praying as if prayer really changed things. It wasn’t the crowds that made Acts Chapter Two so special. It was the spiritual passion that gets elevated whenever a people practice these four things (see Ezekiel’s Bones).

But the most important thing to learn from the second chapter of Acts is that it didn’t last. Four chapters later, Stephen (one of the deacons in charge of the food bank) gets arrested. He tells the court that God isn’t served by people gathering in the temple and taking up a big collection. God is the God of the wilderness. Our shelter in the storm. Our hope in the midst of pandemics and economic downturns. The one who sends us out to the world. The one who doesn’t let us get too comfortable; but is always challenging us to be faithful in tough times.

Then Stephen gets put to death. In the great persecution that follows, the people who gathered in the temple courtyard get scattered out into the nations. We’d call that radical social distancing.

Just after WWII, a golden era of Christianity came to America. We built fine churches everywhere. We packed the pews, gathered large choirs, and co-opted our culture’s obsession with mega-things. We stopped inviting our people to read the scriptures for themselves or to weave prayer into their daily family life. We made worship an optional retreat from our work idolizing world, instead of seeing it as the antidote for our American obsession with success. We delegated Christian witness to the professionals, both in our local church and online. We distanced ourselves from the recipients of our charitable gifts and squandered our golden age. Now, in nostalgia, we blame the coronavirus for the loss of something we haven’t really possessed for twenty years. This is akin to insurance fraud.

There are two ways that a golden age ends in the church. Either as in Acts 2:42 where spiritual passion became so intense that God declared them ready to transform the world. God allowed persecution, and they were driven out of Jerusalem and made witnesses to the ancestors of our people. Or a golden age can end in nostalgia, apathy, and the failure to adapt. To quote the prophet Dylan, “Those who aren't busy being born are busy dying.” 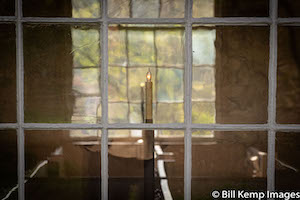