Deprecated function: Array and string offset access syntax with curly braces is deprecated in include_once() (line 20 of /home/ezmpkoktxhha/public_html/billkemp.info/includes/file.phar.inc).
×
Luke 4:21-30
Jeremiah 1:4-10
"See, today I appoint you over nations and over kingdoms" - God's calling of Jeremiah

If there is anything that we learned during the Trump era, it is that all speech is both political and religious. If I say that the coronavirus epidemic will be over by Easter, I am being a prophet in the biblical sense. (The Old Testament speaks about stoning false prophets) When Jeremiah is called to ministry, God says, “today I appoint you over nations and over kingdoms, to pluck up and to pull down, to destroy and to overthrow, to build and to plant.” If Jeremiah were doing his thing today, he would certainly deepen our partisan divide. In Jesus’ first sermon, he reversed the “our nation first” rhetoric of his day’s leaders by reminding the faithful that Elijah did his greatest miracle on the wrong side of the border, and that Elisha is known for bringing healing to the enemy of Israel.

What does God want from our political leaders? Justice, mercy, the fair treatment of prisoners, and a hand up (or hope) for those in poverty. These themes were in the Isaiah text Jesus shared when he preached in the synagogue in Nazareth. History teaches us that justice and mercy are rarely present when an autocrat or a small political clique rules a nation. Power corrupts, which is why the devil offered Jesus all of the kingdoms of the world (Matthew 4:8-9). When Christians find themselves in a nation with free and fair elections and a ruling body that debates on an open floor the policies that are best for the people, their faith encourages them to vote, run for office, and enter freely into the back and forth of healthy debate. When those in power oppose justice and mercy, we must be as political in our protest and activism as Jeremiah, Jesus, and Martin Luther King, Jr.

I pray that one day all of God's people will live under some form of a democratic-republic. The Greeks developed democracy in Athens about the same time as Jeremiah was prophesying in Judea. It wasn’t perfect, only male citizens could vote. But it was much more just and humane than the immoral mess that beset them when Alexander the Great steam roller-ed them into his Macedonian Empire. This gave rise to the autocratic Seleucid and Ptolemaic rulers that displaced the godly republic that had formed in Israel under Ezra and Nehemiah. Meanwhile, the Romans had a republic but lost it to Caesar Augustus, who went by the imperial title, “Son of God.” A century after this, the Apostle Paul went all around the Roman Empire telling people Jesus was the real son of God, and that they had crucified him in the name of their emperor. He and the early church were not persecuted for their religious beliefs, but because they chose not to recognize the empire. (Yes, Star Wars is a Christian movie).

In the 1800s, Napoleon exchanged France’s recently founded republic for an empire. The British saw this as a challenge to their own empire (and kings) and fought an expensive war to defeat him. On this side of the Atlantic, thinkers such as Thoreau and Emerson contributed to the progressive attitude that saved America from a similar fate. In the 1860s, southern traitors challenged our commitment to a democracy representing all the people. I am convinced that if the South had won the Civil War, they would have soon installed an irreligious dictator. Many southern state legislatures today have similar power-ball dreams.

In the last century, again taught us this lesson; a people can have either a political system that is diverse (two parties are better than one) and inclusive (all votes are counted) or an empire controlled by a populist minority party with a strong leader. Hitler and his thugs with dreams of having an empire greater than Rome’s took over the German republic. In the 1930s, IBM’s high-tech card sorting machines supported a census, which allowed the Nazis to round up Jews, gypsies, and homosexuals and send them to the gas chamber. It also enabled them to raise a mighty army. Christians like Bonhoeffer were modern Jeremiahs, calling their political leadership demonic.

So no, I will not separate my religious duties from my political ones. What would Jesus preach this week, as the rights of all Americans to be counted equally and fairly at the ballet box are under fire in state after state? Would he say that Isaiah’s call for justice and mercy only applied to an ancient past? 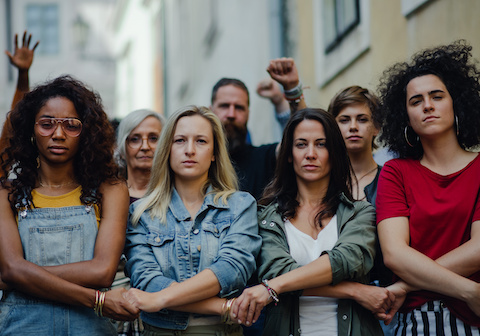