Deprecated function: Array and string offset access syntax with curly braces is deprecated in include_once() (line 20 of /home/ezmpkoktxhha/public_html/billkemp.info/includes/file.phar.inc).
×
Proverbs 22:1, 22-23
The rich and the poor have this in common: the LORD is their maker - Proverbs 22:2

The Bible says this bluntly:

The rich and the poor have this in common: the LORD is the maker of them all… Do not rob the poor… for the LORD pleads their cause… [and punishes those that harm them].

Sixteen years ago, New Orleans was devastated by hurricane Katrina. Rich and poor suffered, losing property, and many becoming refugees in distant places. While both good neighborhoods and bad fell equally under the deluge, most of the 1,800 deaths occurred among the poor. If you looked six months or a year after the disaster, you would find continued suffering among the poor, but the middle class and above returning to their pre-Katrina lives.

A similar story is occurring with the COVID-19 pandemic. Communities of color and the rural poor are dying at a higher rate than more affluent neighborhoods. Women and low-wage workers are still struggling to return to their former level of employment.

This week, Hurricane Ida swamped the same Louisiana coastline that Katrina had hit. Thankfully, there has been less loss of life. In recovering from hurricanes, the rich and poor have more in common this year than they did sixteen years ago. It is important, though, that we reflect upon how trauma affects the different social classes. The Bible urges us in many places to note that every human life is equally beloved and made by our creator. Rich and poor have the same Lord watching over them. Further, the Lord pleads the case of the poor and will not leave unpunished if we neglect them.

Today in America, expensive real-estate is often built on sand and in flood zones. Marshlands are paved over, magnifying the impact of storm surge and leaving the water nowhere to go. We continue to elect politicians who deny climate-change and refuse to prepare for the shifts in population centers that rising sea levels and constant wildfires will bring to our country. Amid this foolishness, the poor and transient are often forced to live in neighborhoods that offer the least protection during a natural disaster.

When we calculate the cost of Hurricane Ida, let us be mindful of how our system is set up to distribute that suffering. We have an American myth that says that people who are wise buy insurance, and that homelessness is the fault of the person on the street. The silver lining behind the storm clouds of this week has been the opportunity to see ourselves in the mirror. Take away the rich man’s home and allow him to sleep for a few weeks on a cot in a shelter. He will soon dress and think like his poor neighbor. He will learn the meaning of the proverb; The rich and the poor have this in common: the LORD is the maker of them all. 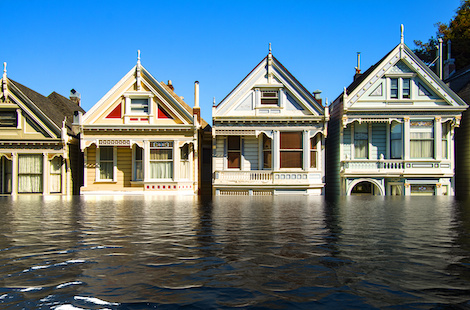