Deprecated function: Array and string offset access syntax with curly braces is deprecated in include_once() (line 20 of /home/ezmpkoktxhha/public_html/billkemp.info/includes/file.phar.inc).
×
Isaiah 43:1-7
Luke 3:15-22
When you pass through the waters, I will be with you. Through the flame, you will go. But it will not consume you.

The passage from Isaiah about God promising to be with us through hell and high water is almost as famous as James Taylor’s song:

I've seen fire and I've seen rain. I've seen sunny days that I thought would never end.
I've seen lonely times when I could not find a friend, but I always thought that I'd see you again.

Isaiah’s lyrics were a comfort to the people of Israel as they returned from exile in Babylon. Most congregations have either a fire or a flood story, or both, in their archives. Unfortunately, for those being effected by this year's El Nino, the memory is in the process of being made. If you are currently in the midst of the flood, this scripture speaks over the millenium about our God, who never tires of saving us. If you are dry and comfortable, this is a good time to dig in the archives and discover your church's flood/fire story.

For James Taylor, the fire and the flood deals with his struggles against heroin addiction and mental illness. His lonely sojourn in a mental institution, forms the second of three stanzas about deep loss. Fire and rain seem appropriate metaphors for James to use to describe the wilderness that surrounded the suicide of a friend, the brutality of shock therapy, and the breakup of his band and friendships at Apple records.

I think it would be a mistake to simply think that its only the theme of water and flame that links James Taylor and Isaiah with Luke’s account concerning the fiery preaching of John and the Baptism of Jesus. All of these stories and lyrics hit us with a two by four. They scrape raw the memories of our darkest days.

We face in each of these stanzas the blunt fact that disaster can happen to anyone and to any congregation. That in the midst of fire and rain, God will be present. After disaster, there is usually the long wilderness of transition. We name our loss, perhaps not as eloquently as Taylor does when he says, “but, I always thought that I’d see you again.” The world at the other end of our experience is not the same.

The cross and its fiery pain was present when John baptized Jesus, just as the resurrection and its hope were there when James Taylor emerged from rehab. We each need the courage to tell our story. 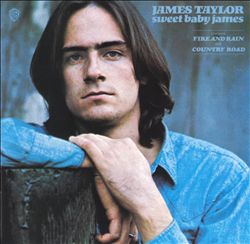