The story of Abraham in Genesis 21:8-21 is impossible to preach, so why not take it on this week? In it, God is criminally negligent, Abraham guilty of attempted murder, and the notion of predestination affirmed. There are few places in the Bible more open to controversy. There are some great truths, however, that you can teach using it. You can talk about the sacredness of family, marriage, and the grace of God. You can also preach the great lesson of Scott Peck, that life is painful and we can not grow as people until we embrace the emotional difficulties of our current situation. Because Abraham is unwilling to face the crisis of his family on this day, he subjects himself to a lifetime of regret.

But first, we have to talk about Sarah. Sarah sees Ishmael playing with her baby Isaac and is overwhelmed by the green eyed monster, Jealousy. Ishmael is Abraham’s firstborn child, something no son of hers will ever be. There is something more. Sarah sees the financial resources and the family’s prestige as a fixed commodity. The more one child gets, the less that is available for the other. This ‘zero sum game’ is Sin’s most popular myth. Her grandchild, Jacob, will divide the family’s wealth among 12 sons and not diminish the inheritance one iota. In todays world, people are always using the devil’s zero sum logic and abandoning God’s promise of abundance.

A brave preacher, will take this opportunity to talk about how the word ‘Family,’ is being redefined. Even for Abraham, the word family didn’t mean a heterosexual marriage, resulting in 2.25 children, living in a suburban home, surrounded by a white picket fence. Here is God’s grace, that the father of many nations will have under his tent a diversity of races and children by more than one mother. The more I spend time talking with my neighbor, who has fathered children with three women and is now attempting to regain custody of a child living in another state, the more I think that the family of Abraham is not that unusual. Think in detail about the families of your congregation before you preach. What message can you give that will encourage them to accept the complexity of their own situations and seek for God’s grace. The time has ended for our participating in a shaming culture that lifts up one homogenous image of family as the only acceptable form.

Finally, God is negligent at the beginning of this story. Sarah is badly misbehaving and needs to be struck by lightening. God doesn’t punish us that way though. He doesn’t want us to be good for the wrong reason (see Job 1:9-11). The consequences of our sins, are usually born by others. Abraham shares the guilt that should have been Sarah’s alone. Here we encounter one of the mysteries of marriage. They are a unit. Even when one of them does wrong, God doesn’t act to separate them. God instead, extends salvation to Hagar and Ishmael. When they come to tell the story of their own lives, they won’t mention Sarah or Abraham. They will speak about the God who came to them in the hour of their need. I try to avoid the quagmire of predestination by saying that God’s grace can only be spoken of in the first person. 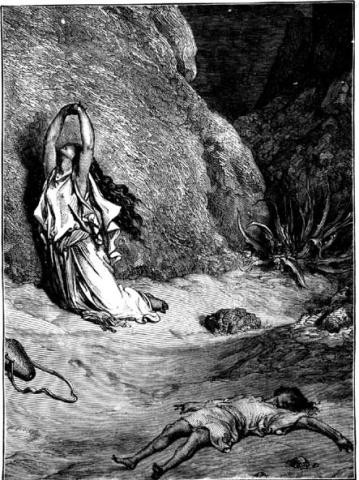