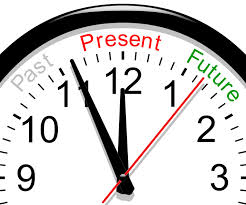 On two occasions, I have pastored congregations whose people and leadership had less expendable income than the average resident of the the state. I noticed that when I went to meetings, I was the only person with a calendar. It was part of the culture of both of these congregations, to focus only on the present. I had a hard to time drumming up interest in planning programs that occurred in the future. A Zen master might praise these people for being mindful and living in the moment. Imagine how frustrating I found it.

On another occasion, I served a church where the average member had more disposable income than the residents of the immediate neighborhood. Here my board members dutifully brought their calendars to meetings. But, the conversation around the table was littered with talk of things past. There were many sacred cows that could not be moved because they were given in memory of someone long dead.

The other congregations that I served, were closer to the economic mean. They had middle class values which included a tendency to focus too much on the future. They never rested to simply enjoy the moment. They never looked back to previous generations for wisdom.

The “Circles out of Poverty” program has a significant piece dealing with the value people place the past, present, and future. People who have been raised in poverty, tend to focus on the present. Those who are relatively well off, focus on the past. Middle class people value the future above the present and the past. This is a rough, but helpful, generalization. The generationally poor, need to plan more for the future. Those who are wealthy, need to let go of the past. We in the middle, need to realize that our mental focus on the future is only appropriate about a third of the time.

Church leadership often involves challenging the temporal focus of your people. if they are past oriented, try to help them understand how wealth colors their world view. If they are future oriented, help them to see that their middle class values might be acting as a set of blinders, preventing them from seeing the full breadth of human history. If they are struggling along, one day at a time, help them to realize that an exclusively present-oriented world view  is one of the things that entraps them in the downward spiral of poverty.