When I go to speak someplace new, I always get asked, “What do you want us to call you?” They say this because some clergy like to be called Reverend So and So. In some traditions, the faith leader is called “father.” Jews call their clergy “rabbi” which means teacher. Jesus was often called this, but he didn’t like it. In fact, he made a distinction between the titles we give those who are religious leaders and the titles we give the various secular and political authorities that rule our world. When it comes to those who teach us about religion, Jesus said:

By way of contrast, he says that we should give unto Caesar that which belongs to Caesar. Since the word “Caesar” is a title, he’s not just talking about taxes. We live in a world divided by class, race, political boundaries, and civic offices. We would not survive long if we didn’t respect those above us. In our churches, homes, and spiritual life, we tend to envy and want to appropriate the honor given to those above us in society. The world has its class system. Jesus says, “don’t bring it home.” We should root out all hierarchy in our personal life. “Call no man father” means don’t make the husband the head of the house. Adults play an adult role in the family, and children each play a role that is appropriate to their age. No one by their position deserves more respect than any other family member.

Jesus wishes desperately to change the way we relate to each other. Is everything we do supportive of the people we live close to? The rule for the church and the family is one of servant leadership. I think the 18th century Quakers were right in changing their speech to emphasize the duty of humility we owe to each other. 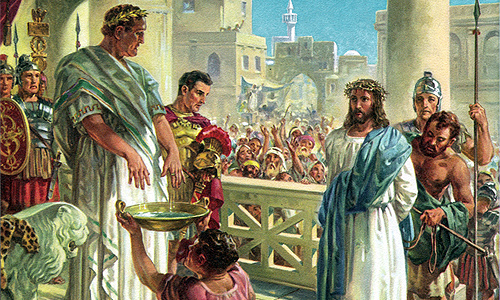