Do this: while you’re reading Solomon’s dedication prayer for the temple, take a can of Pledge and dust the altar rail. If your church doesn’t have one, take a few moments to complain about that fact (the architect must have been a pagan). Solomon admits that God doesn’t need an altar rail to be worshiped — in fact his great temple didn’t have one. Actually, his whole temple was an altar rail and the courts around it equivalent to the kneeling pads we place before our rail. In church language, people come to the altar during prayer time, even if they don’t leave their pew. Similarly, those living at a distance in Solomon’s day, lifted their hands towards Jerusalem and the Temple when they prayed.

Solomon admits that God is not limited in time and space the way we are, nor does he need a “house to dwell in.” This is a key developmental moment for religious thought, God is greater than the places we construct to honor him. But, we are geographical people —needing particular times and places to incorporate the sacred into our lives. Even couples who were married in a cabbage patch by a drunken sea captain, honor the particular day of the year that is their anniversary and speak of how they said their vows before God’s altar, such as it was. Even the most web savvy techies, use geographical constructs when they go online; having home-pages, ISP addresses, and browsers named Safari. Our worship of the omnipresent god, is diminished when we lose respect for sacred space, sacred time (sabbath), and the altar rail in particular.

Even though it’s two and a half to three millennium old, Solomon’s dedication prayer sounds very current and relevant to my ears. This is because the gap between human religion and eternal realities remains about the same. Solomon’s humility, when he admits that God doesn’t really need this Temple contrasts the bombastic attitude Herod and the Sadducees had about the Second Temple (Matthew 21:12-17  is a complimentary scripture to 1st Kings 8). Many of our church members evidence the same spiritual stupidity.

Solomon, however, takes a great leap, and imagines the role the temple and its altar rail-like courts might play in the lives of foreigners. The temple he has built is a “house of prayer for all nations.” We too, need to catch Solomon’s vision. People today needs places they can go, and scheduled times they can trust, to say their prayers. They don’t need to have our same theology or ethnicity to be permitted to use our sacred space. 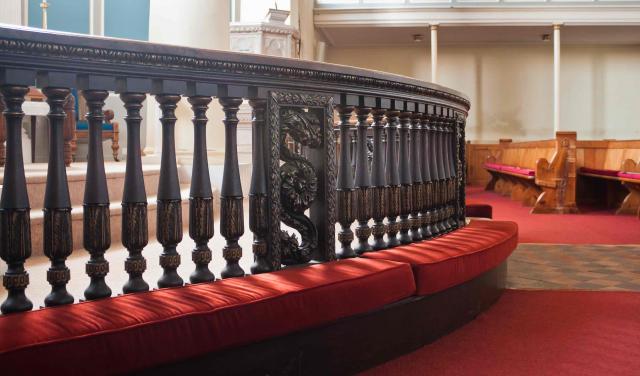