From ancient times there have been two bedrock principles: first, that couples should have children, and second, that male children are preferred. A male child could become the chief of your clan in prehistoric times (sorry Rachel Welsh), and later, could carry on the family name. The Bible doesn’t carve these in stone. In fact, the commandment to honor your father and mother moves in the opposite direction, implying that descendants should honor, or name, their mother’s people as well as their father’s. Gender distinctions fail to be mentioned anywhere in these top ten. When Jesus says that all the commandments hang upon loving God and our neighbor, I am reminded that both male and female were made in the image of God (Genesis 1:27) and that my closest neighbors are women. The story of Jacob and Leah (Genesis 29:15-28) demonstrates the inhumanity of blindly following the two ancient principles listed above while rejecting Jesus’ call to compassion.

You have to be careful what you read into the Bible. All creatures, including humans, are told to propagate and fill the earth (Genesis 1:20-28). Today the world is full, and some would say, over-populated. Before Jesus’ resurrection, men often sought life beyond death by being remembered in their descendant’s names. When Jacob is of age, he travels beyond the Jordan so that he can find a wife from among his parent’s people, and so honor his father and mother. He runs into Laban, a man who wants grandchildren. Laban also wants to get rid of a beauty-challenged daughter. He tricks Jacob into marrying both of his daughters. He also provides a couple of slave-girls to ensure that propagation occurs. What follows is a sad tale of four women and a marriage torn apart by competition for Jacob’s attention. At one point, Jacob gets sold for the night for the price of a mandrake root. The children are not okay either. Out of the twelve sons, only one or two are fit to be clan leaders. Their sister Dinah should have been considered for the honor, instead of being left in the kitchen.

The Bible doesn’t tell this story to give us an example to follow, nor should we assume that having children and favoring males are a part of its moral code. Similarly, the marriage of Adam and Eve is not a model for today’s sacred relationships. I was reminded this week of something the late Rep. John Lewis said, “I fought too long and too hard to end discrimination based on race and color, to not stand up against discrimination against our gay and lesbian brothers and sisters.” 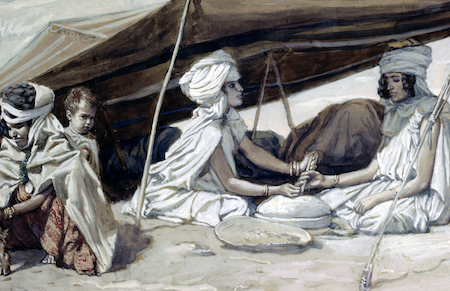