In Luke 20:27-38 we encounter the rather odd custom of Levirate Marriage. This is where the widow of a man who has died without an heir is given to his brother. Jesus lived during a time of transition. Marriage customs, such as Levirate Marriage and the practice of having young people always marry someone from within the clan, were dying out. Hellenism — that is the more urbane customs of the Greeks and Romans including their acceptance of homosexuality — was reshaping the daily life of first century Palestinians. We too, are going through a time in which marriage customs are being reshaped. In the passage above, Jesus is being asked, not only about eternal life, but also about marriage. The Sadducees no longer practice Levirate Marriage, but they know that some rural villages, perhaps even Jesus’ Nazareth, still do. It was common before the talmudic reforms of the first century for a widow to be given to her husband’s brother so that she might have a home and not be forced to marry outside the village. In a similar way, arranged marriages were once common among immigrants to this country, as they sought to prevent their young from leaving the confines of their ethnic community.

Such customs probably seemed strange to the Sadducees, as they do to us. Jesus, being a country bumpkin should be expected to defend such customs. But Jesus also believed in eternal life, something the Sadducees thought was equally absurd. So seeking to hit two birds with one stone, they asked the question:

“If there was a widow in your village and she was married to a succession of brothers, whose wife would she be in the heaven you spend so much time talking about?”

Perhaps they didn’t know Jesus as well as we do. We know that Jesus would never support a custom that involved giving a woman away like property. He never spoke in support of Levirate Marriage, nor did he ever condemn homosexuality. For Jesus, the customs and rituals of our society should be governed by compassion. He spoke against the urban custom of a man divorcing his wife on trivial grounds (Matthew 19:3-12) and refused to participate in the stoning of a woman caught in adultery (John 8:1-11), presumably because the man wasn’t also on trial. The apostle Paul reflected Jesus’ approach to society’ rules when he said,  “Let no debt remain outstanding, except the continuing debt to love one another, for whoever loves others has fulfilled the law… Love does no harm to a neighbor. Therefore love is the fulfillment of the law” (Romans 13:8,10)

As for eternal life, Jesus says that in heaven love is perfected. If our marriages on this earth have not been loving, then we should take comfort that heaven has abandoned the laws and customs, including marriage, that are not needed in a place of perfect love. Those of us who have experienced love in marriage, however, should be thankful that in heaven we will know and continue in love with those people we have enjoyed here.

We don’t know much about heaven and Jesus is pretty mysterious on the subject. He says that God’s great love for individuals continues for eternity. Just as Abraham, Isaac, and Jacob live on in God’s eternal present, we shall live eternally in God’s love. That should be good enough for us. 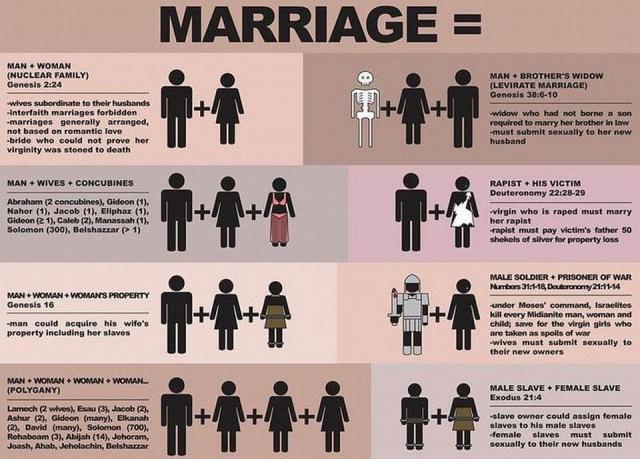