×
Luke 3:1-20
The voice of one crying out in the wilderness - how John the Baptist is described

In 1954, a woman named Dorothy Martin had a vision. She saw the world coming to an end. An Apocalypse, like that of Noah. (This was before we worried about rising sea levels). All of humanity was about to be wiped out by a flood and only the faithful would survive. She wasn’t a bleak prophet, like John the Baptist. No. She was a suburban housewife from Oak Park (the Chicago neighborhood of Frank Loyd Wright). There was some good news, according to Dorothy Martin. A flying saucer was scheduled to pick up the faithful. Those who truly believed just needed to come to her back yard on December 17th at 4 pm sharp.

You would think that would be the end of the story. In fact, it seems strange that anyone remembers who she was some sixty-seven years later. But people like her keep showing up on the American landscape. She preaches the same gospel as Jim Jones, David Koresh, and I would argue, Donald Trump. But wait, before you stop reading, there is more to be said about Dorothy Martin. When the flying saucer failed to come on 12-17-1954, Dorothy had another vision. The aliens were giving them another week, just to weed out who was faithful and who was not. This time the saucer would come at exactly midnight on December 21st.

Very few of her followers wanted to admit that they had lost faith in her. A large number gathered in her living room the following week. A social scientist named Leon Festinger asked Dorothy if he could come and observe. He questioned the group as they waited for the clock to strike twelve. Everyone had a story. Some told how they had left their jobs, separated from their marriages, and lost all their friends because their faith in Dorothy. They were true believers. When midnight came and the saucer didn’t, they were astounded. They sat unmoving for four hours. Then Dorothy said that she had another message. Because of their great faith, the aliens were canceling the apocalypse. Everyone went home happy.

Like today, the 1950s were a time in which apocalyptic promises were easy to sell. The unrestrained materialism and racially segregated nationalism of the time had polarized America. Those who flocked to the suburbs found that their houses made of tacky-tacky did not assuaged their gut-level foreboding. Things were about to fall apart. Soon, their children were learning to duck and cover in case of nuclear attack. Race riots were coming. Hippies would be soon be experimenting with acid and dropping out. This latent ennui made alien forgiveness and flying saucers believable.

I would argue that a similar social situation existed when John the Baptist stepped on the stage. People from a wide variety of social classes accepted to his apocalyptic message. Crowds came out to the Jordan River because they knew things were about to fall apart in their society. But John did not offer them flying saucers and escapism. John was not a cult leader. Instead he baptized people in order that they might know forgiveness and the love of God. With that assurance they return to their jobs and everyday life. They learned from John how to confront the ills of their nation and make a difference in their community.

Today we know that things are bad. Sea levels are rising. Droughts, forest fires, and hurricanes are becoming ever more devastating. Refugees clog the highways. are everywhere and autocrats are taking the political stage and preaching hate. When their political fortunes dim, cult leaders beg their followers to double down. After studying Dorothy Martin and other apocalyptic movements, Leon Festinger wrote a book entitled, “When Prophesy Fails.” He detailed the psychology that causes people to seek simplistic (and in retrospect, idiotic) solutions to problems which require us to become better people. When Covid-19 arose, it was easier for many to follow cult-leaders who spoke of individual freedom and escapism, than to become more compassionate, wear a mask, and care for those who are isolated or have lost work. John the Baptist would tell us to fix the things that are broken.

So why do I call Trump a cult leader? Remember how he prophesied that he would win the election in 2020 by a lot? Then what happened? His talk of a “stolen election” is just as fanciful as Dorothy Martins talk of aliens changing their mind. Yet people still follow him. How should we understand January 6th except to see it as the faithful double-ing down on the silly promises of their cult leader? Then the My Pillow Guy prophesied that Trump would magically become president again in August. Wait, I think I hear a flying saucer coming to land.

I think we need to see this as a religious phenomena. People seek meaning. Dorothy Martin’s group was known as “the seekers.” Almost half the country bought into Trump’s promise that he would take them from being losers to being seekers to being winners. Many of them are now doubling down on that hollow dream. Compare that to what John the Baptist promised those who came to him. The voice in the wilderness did not ask people to put their faith in him, nor did he expect them to double down. He called them to repent before God, and then return to their lives with the hope of being better people.

Religion ought to be about seeking God, seeking to know ourselves, and seeking to  be more compassionate. 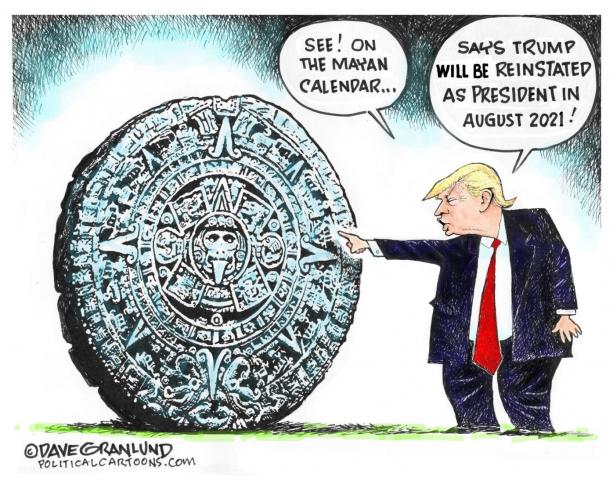