Deprecated function: Array and string offset access syntax with curly braces is deprecated in include_once() (line 20 of /home/ezmpkoktxhha/public_html/billkemp.info/includes/file.phar.inc).
×
Matthew 18
"For where two or three are gathered in my name, I am there among them" - Jesus

Jesus doesn’t want the church to be a cult. I’ve been watching the HBO series “The Vow” lately. It tells the story of a cult that I was unfamiliar with. It has a leader that everyone says is the most intelligent man on the planet. He is shown surrounded by beautiful young people, some of them Hollywood stars, all of them are well-to-do and white. Typical of every cult, though, there is an authority pyramid. Everyone knows their rank – in the vow they wear colored scarfs – and you don’t question what someone above you says. Then one day the house of cards collapses. The leaders are indicted for sex trafficking.

In the eighteenth chapter of Matthew, Jesus speaks at length about the nature of the Christian community. The word “church” appears in most translations, but that is an anachronism. A better translation is assembly or community. He is speaking in general terms about the tightly bonded relationships we form. We are born into a community called family. We join churches and organizations. Live about a third of our adult lives with coworkers. None of these are meant to look like pyramids. Jesus envisions community with the barest minimum of authority structure (Mark 10:42-45).  Communities are built on mutual trust and respect. It’s okay to question the leader. Group discussion is encouraged. There is total transparency. Your family, your social club, your workplace, and especially your church, should never become a cult.

Matthew 18 begins with the question, “Who is the greatest?” They expect Jesus to answer, “I am.” He doesn’t. He makes a child stand before them. He then talks about the importance of protecting and nurturing the most vulnerable members of the community. He talks about how if 99 sheep stay in the fold, but one wonders off, the job of the leader is to seek and care for the lost one. Then he ends the chapter talking about the inevitable conflicts that occur between us when we are in a community. Here again, Jesus does the unexpected.

When I was pastoring a church, I was constantly being asked to go speak to someone, tell them that they are wrong, and be a leader. Occasionally, I would point out that Jesus says that you – the low-ranking member of the church – should go to them, one on one, and enter into a dialogue. Then if that doesn’t go well, take a couple of people who have no more expertise than you or your victim. Then if you want to pursue it further, put it to a large group discussion. At no point are we to ask the pastor to act as an authority. After all, it is a church, not a cult.

Most people would prefer a cult. Being in a community means questioning people who may be more articulate than you or have more training or have a higher status in the organization than you do. We also seek to avoid personal conflict. It’s nice to have a strong leader put people in their place for us. We would rather gossip with those who think like us than go and dialogue with the one who offends us. I have read enough Jesus to suspect that every time I am offended by someone, they are someone I need to get to understand. I might be the real offender. Real Christian community is rare. Cults are common. 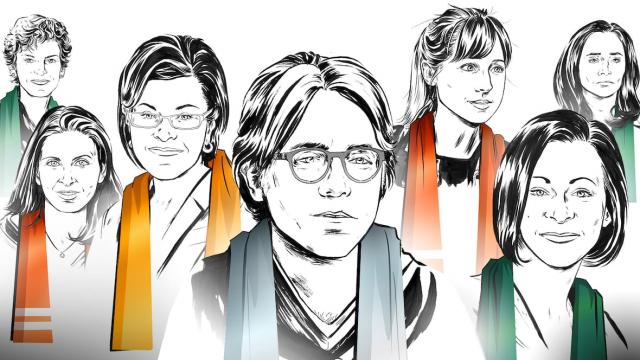