Deprecated function: Array and string offset access syntax with curly braces is deprecated in include_once() (line 20 of /home/ezmpkoktxhha/public_html/billkemp.info/includes/file.phar.inc).
×
James 1:16-27
[Real religion is] to look after orphans and widows in their distress and to keep neself from being polluted by the world.”

There was a time, I’m old enough to remember, when religious people had 84 reasons to believe the world was going to end in 1984. Then there was a time, not long after that, when many churches, my own included, stockpiled batteries, bottled water, and baby diapers, because they were convinced that Y2K would make such things valuable. There was a time when almost every Christian woman I knew, wore a little angel on their shoulder (for protection or advice, I never found out). Unicorn chasing would be in the Christian Olympics, if we ever decided to have our own, because we think the Greek one has too many pagan symbols. Such malarky gives religion a bad name.

Jesus’s brother James is blunt, “Religion that God our Father accepts as pure and faultless is this: to look after orphans and widows in their distress and to keep oneself from being polluted by the world.”

When I was younger, I was taught by well meaning religious people that the “stain of the world” was drugs, sex, and rock&roll. Now that I am mature enough to recognize such teaching as malarky, I see that the stain of the world is populism, greed, and whatever is considered “truth” on cable news.

James is the most practical of the New Testament books, and may give us the clearest view of Jesus’s day to day teaching. James devotes the second chapter of his little book rebuking Christians for bringing the world’s love of the rich, famous, and powerful, into the church. There was in his day a moral majority that thought being poor was a sin. There is today, a majority in many churches who are content to ignore people of color and their concerns about our society. Churches by their silence, paint themselves with the stain of the world that is racism.

In this first chapter, though, James sets the stage for telling us in no uncertain terms that real religion consists of caring for widows and orphans (verse 27). He tells us first:

Religions is all about widows and orphans, James says. They were the most vulnerable members of first century society. Their position correlates today to those among us without adequate health insurance, those whose jobs or military service may be dangerous (leaving behind widows/widowers), those who fail to earn a descent wage, and those who must flee their country in search of refuge. It is the world's stain, to respect those in authority who think themselves Christian while creating virtual orphans at the border through their family separation policy.

See the next installent on James, chapter 2:  Poverty 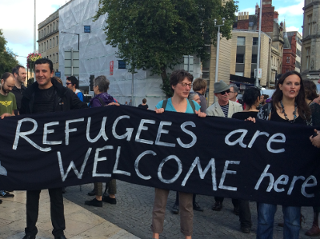