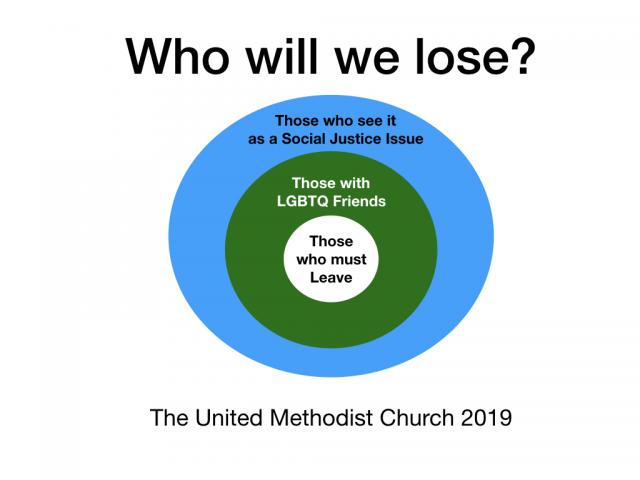 I think every United Methodist congregation and church leader should prepare for the uncharted territory that lies ahead for our denomination. Those of us who followed the Special General Conference closely, need to be careful to be both realistic about the likely consequences of the adopted Traditional Plan and patient with the ongoing decision-making process of the larger church.

First, we should say that just taking a vote never ends the discussion on significant issues relating to social justice, scriptural interpretation, and individual conscience. Those with a more progressive theology have been put on notice that our denomination will not be accepting homosexual clergy-persons for the foreseeable future. There are judicial council rulings that will affect how this decision applies to current clergy, bishops, and conference practices, but these legalities are unlikely to reverse the direction we are now headed. Anyone who states that this legislation lacks teeth is diminishing the work of the delegates in St. Louis. Like it or not, the 2019 General Conference has set an agenda for the United Methodist Church and its mission. A more conservative wind is blowing.

Second, the delegates seriously explored and prayed about each proposal. They voted with apprehension, knowing that no matter what was chosen there would be undesirable consequences. No one can predict if the denomination will be larger or smaller in five years because of this decision.

The adopted Traditional Plan will force some members, congregations, and church leaders to leave the United Methodist Church. Think of this exodus as three concentric circles. There are those clergy and laity who must leave because the church no longer recognizes the loving and covenantal relationships they have entered into, or because they are being asked to accept a gender identity which they feel is false. Surrounding this small inner circle of people who must leave, is a much larger circle of people who may choose to go with them because they have LGBTQ family members, respected coworkers, and friends, whose personal testimony is more persuasive than the church's teachings on this issue. Then surrounding these two circles is a vast throng that may number a third of the United Methodist Church's total membership. These people view LGBTQ rights as a social justice issue. These people are now making difficult decisions about their future relationship with their church. Whatever we feel about the issues, or the scriptures, or the decades that our church has spent going around and around about human sexuality, we dare not casually dismiss those who find themselves in one of these circles.

Our next steps must be guided by prayer without prejudice. Without bias, we must mourn the loss of every member. Even those we disagree with must know the compassion we have for them.

My friend Joe Fort of the Texas Annual Conference offers what is probably a realistic assessment:

Sadly, I do not believe that any decisions the church renders on this matter are going to cause us to grow.  Had the One Church Plan passed, I think we would have seen a large exodus of conservatives from the worldwide church.  But I also think there could be a mini-exodus now.  Truthfully, I believe most of the progressives, while upset right now, will stay in the game and believe that sooner or later the votes will go the other way.  Passing the Traditional Plan does not end the debate forever.  Even if the Judicial Council rules the amended version to be constitutional (not requiring a “super majority” vote in the Annual Conferences), my guess is that we will continue the fighting in 2020.  It is possible that a few very progressive congregations will want to exit, but I’d be surprised if this is a great number.

My guess is that even though the Traditional Plan passed, there will be a few very conservative pastors and congregations that still want out.  This will be because they sense what happened this week is not going to end the debate, and they are done talking about it.  I can think of a handful of churches in our Conference, particularly because of the theological stances of their pastors, that may be led this way over the months ahead.  But again, the bottom line is:  no matter where you stand on this issue, we aren’t going to have people flocking into the UMC either way.  More likely, we’re going to lose some folks.

The above being said, it is important that local church leaders develop a tool box related to this issue. I'm working with a talented team of transitional leaders to produce a resource we are calling, "Help! My Church is Leaving Me." Available mid-May 2019 from www.notperfectyet.com and Amazon.