Deprecated function: Array and string offset access syntax with curly braces is deprecated in include_once() (line 20 of /home/ezmpkoktxhha/public_html/billkemp.info/includes/file.phar.inc).
×
Hebrews 11:29-12:2
Genesis 19:1-17
By faith Rahab the prostitute did not perish with those who were disobedient, because she had received the spies in peace. -Hebrews 11:31

The 11thchapter of Hebrews is a long catalogue of saints and what they did to earn our remembrance. It’s fun to look down the names and see who made it and who did not. Twenty names by my count, all of them in the Old Testament. A reminder that the Old Testament was the only Bible the first century Christians had. We avoid it at our peril.

Now notice, David made the list, but Solomon did not. In fact, David is the only king mentioned, a grim reminder that for early Christians those with political power were always respected, but rarely considered righteous.

In the Old Testament, people are often introduced by some reference to their glowing genealogy, presumably to show that the good grapes come from vines with deep roots in the soil of the nation and a pure linage. I don’t see any of those pure-bred people in Hebrews 11. In fact, Abel has no grandparents, Abraham is an immigrant (“…a wandering Aramean was my father” Deuteronomy 26:5), and Noah just got off the boat. In this age of white nationalism, with its references to “blood and soil,” we must remember that early Christians found racism and religious prejudice to be an existential threat.

In the list of saints, we find Jephthah, Joseph, and Rahab. Who were they? Jephthah was the son of a prostitute whose family resented him, casting him off and making him a refugee. He traveled the world until they called him back to solve a crisis. (Judges 11&12) Similarly, Joseph was sold into slavery by his brothers and lived the rest of his life in Egypt, far from the promised land. Joseph makes it on the list because reconnected with those that had hated him, helped them in their distress, then asked to be buried, not in the rich tomb the Egyptians were offering him, but near humble dwellings of his nomadic ancestors.

And then there is Rahab. She was a prostitute who makes it on the list because she was hospitable to the people of Israel as they fled of Egypt. We tend to pick and choose when we read the Bible, especially the Old Testament. We often live our lives moralistically, but not biblically. We assume that the people our gut considers to be immoral, are also bad in the eyes of God. We tend to sanctify our own prejudices. We refuse to admit that if we lived in bible times, we might be shocked at motley crowd that the bible considers to be saints. Too often we use scripture to justify our prejudice is against those who were born elsewhere, have a different appearance, different language, or a different sexual orientation than ours. We ignore God who demands that we love all people equally. To do this, we must ignore large portions of the Bible.

Take the story of Sodom and Gomorrah. What was the sin that caused God to destroy them? Read it carefully, three possibilities are suggested. First, there is the fact that they choose to not welcome the angels in disguise. This inhospitality seems to have resulted in them driving away all the good people God had sent to them over the years. If only they had been neighborly to 10 righteous strangers, then Sodom would have been saved. But alas, only Lot and his family had thick enough skins to dwell in that land.

The second sin was violence. It probably wasn’t that bad when Lot first moved in, but violence begets violence. The people of color in our country have good reason to be more afraid after El Paso than they were before.

Then, of course, there was the fact that the men of Sodom demanded to gang rape the angels. Sexual immorality, especially when it is tied to violence and the abuse of those who have been placed in our care, is always a sin. It doesn’t matter if you are straight like Jeffery Epstein or gay like the priests caught up in recent scandals in the church.

This brings us to Rahab the Harlot, or as the Christians of the New Testament knew her, Rahab the Saint. We can imagine her being forced by circumstances into the sex trade. She is given by God’s grace a chance to be hospitable to strangers. She shelters these spies sent from the south. We can imagine her hearing their story of a great God who was providing a new homeland for people like her. She finds faith. Go now and do likewise. 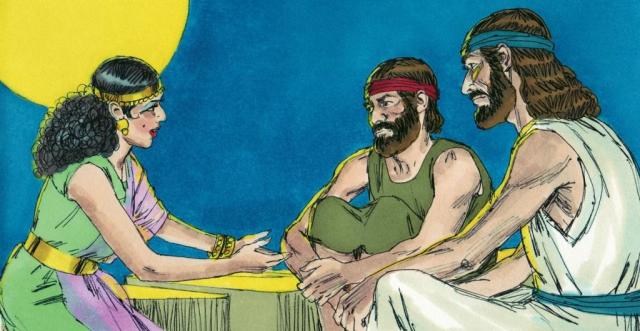