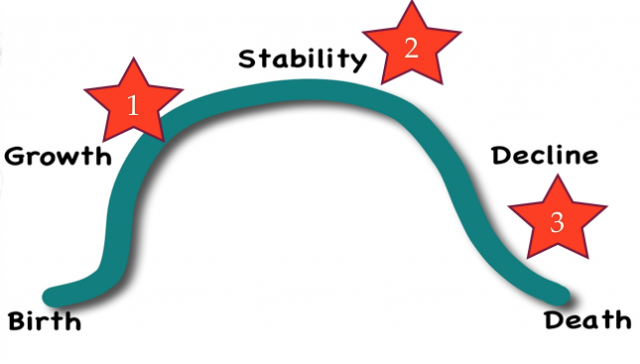 The life cycle of a congregation is often described a bell curve, mapping out membership growth over time. Martin F. Saarinen (The Life Cycle of a Congregation -Alban.org), and others, chart how a congregation is born with enthusiasm, has significant yearly growth for a decade or so, enters into a long period of stability, then falls into decline, leading in time to death. My first response to seeing this curve was to ask, what about Canterbury Cathedral? Obviously there are outliers, that is churches whose lifespan is so unexpected that it skews the chart. Best, perhaps, to disregard both those new congregations that die in less than 5 years and those historic churches that grace the centuries. The lifecycle itself is a hypothetical construct, blessed by the fact that most aggregated statistics form bell curves. At any rate, you can’t look at a chart of average church lifespans and predict where your church will be ten years from now. Every regional cluster of congregations, like a synod or district, forms a messy scatter plot, with older congregations unexpectedly growing and solidly stable mid-life churches crashing. The more individual narratives you know, the less you believe in statistics.

What if we draw a similar life cycle curve for the productivity of a clergy person as they age? This curve might be more sinusoidal; a drop at the beginning, a rise in the middle passing through neutral (doing more good than harm), then a drop off to grey near age 65. A young pastor enters his or her first church full of enthusiasm and the capacity to fail large. Because they both lack wisdom and are likely to be serving in a situation with limited resources, most clergy will find their first decade to be unproductive. Eventually, they move on to serve a church with more resources that matches their now tested leadership skills. Suddenly, they are highly productive. When rewarded with a more substantial church or an administrative post, an average pastor becomes less productive but more dependable. In time, physical aging and the accumulated reluctance we all develop towards risk and needed change, causes a decline in productivity. The life cycle curve plunges downward as the clergy person dreams of retirement.

Of course, this pastoral productivity curve is also a hypothetical construct. Real pastors are so diverse that even a sinusoidal curve constructed from a large sampling would have limited value.   We can’t put our finger on a chart and predict how many members a clergy person will join this year. Nor does knowing a person’s age qualify us to guess whether they are productive or ready to be put out to pasture. Life cycle curves, however, may be helpful starting points for individual congregations and mature pastors as they begin a prayerful self-discernment process.

Churches and pastors need to begin by charting their own statistics and reflecting upon the context of their good and bad times. Every congregation and every individual is on their own path. At times they will follow the general life cycle curve. Where they, as an individual or as a distinct congregation, leave the pack is important. All and all, the life cycle curve is deflating to our ego. Some situations require working to beat the odds and choosing to be an exception. Others require faithfully accepting God’s grace for this present time and making the appropriate adaptations.

Churches will note that a period of enthusiasm and a period of stability is something that they share with all other congregations. Their experience of these times may have been enhanced by the leadership of a former pastor, but he or she did not cause the good times. In a sail boat, the captain sets the sails and marks the course, but the wind and the currents are beyond ones control and tied to that particular time and place. Further, churches that recover from decline, do so by discovering a specific calling or vocation from God. This requires spiritual discernment and is the subject of my new Reality Check 101 book.

Pastors also need to think of productivity as more than just metrics. Who they are will always be more than what they do. Integrity is everything. Leadership cannot be exercised without transparency. If they are in the front end of the learning curve, they need to admit that to the lay leadership of the congregation. Throughout their stable years, the process that pastors use to discern the specifics of their calling will parallel the process their congregation needs to follow to discover their vocation and prevent decline. Mature pastors need to search for ways to overcome the natural effects of aging, particularly; risk aversion, work addiction, and the reluctance to embrace new technology. When a pastor discerns the approach of retirement, they owe it to the church to announce it two years in advance and intentionally prepare their congregation for the transition.

Finally, denominational leadership should consider the implications of the congregational and pastoral productivity curves, but only after running the numbers for the last thirty years of their own judicatory. Do the math carefully, recognizing that denominational entities are dynamic systems with many interrelated parts. False assumptions and their resulting prescriptions can do more harm than good. Be aware that the clergy and congregational life cycle curves will interact: